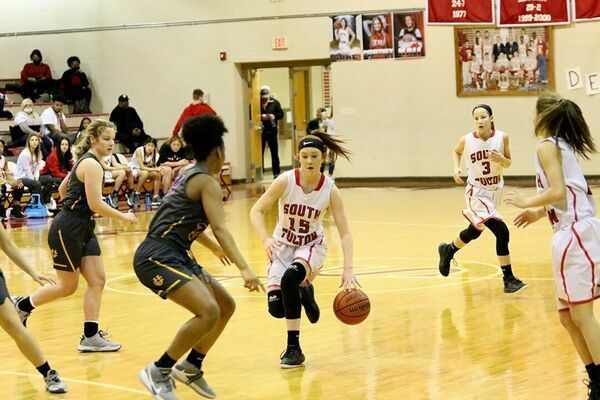 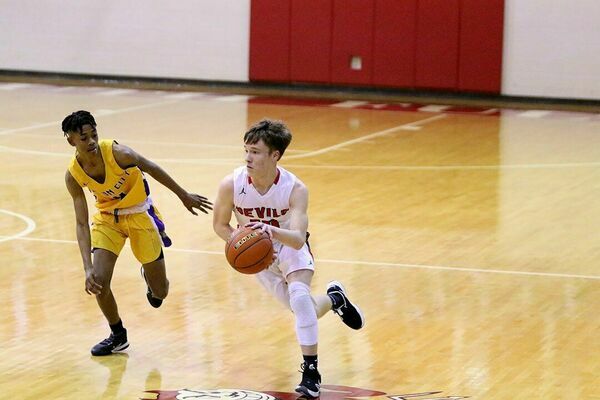 South Fulton Red Devil Drew Barclay chipped in two points against Union City’s Tornadoes, a game which resulted in a seven point deficit for the Devils, and a UC win, 67-60. (Photo by Jake Clapper)
Previous Next

The Lady Red Devils fell to the Gleason Lady Bulldogs 46-74.

The Lady Red Devils scored 10 points in the first quarter, Maddie Gray responsible for five of the 10. Sophia Hodges hit a shot from behind the arc and Aubree Gore had a field goal.

In the second quarter Gray tacked on another four points with two field goals. Anna Gore had a three-point basket. Abbi McFarland and Sophia Hodges each had two points to help bring the Lady Red Devils to a total of 11 points in the second quarter.

Gray had a game high of 15 points. Following Gray was Anna Gore with 14 points and Sophia Hodges with nine points. Aubree Gore, McFarland, Mayo, and McClerkin all had two points each.

Rider Whitehead had a game high of 25 points. Whitehead was 100% from the free throw line hitting five free throws along with seven field goals and two three-point baskets.

Bryce McFarland had four field goals and three shots from behind the arc totaling up to 17 points.

Beau Britt had a field goal and four shots from deep and hit two of his four free throws for his game total of 16 points.

The Red Devils fell short to the Union City Tornadoes 60-67.

Beau Britt hit three field goals and three shots from behind the arc. Britt hit both of his free throws.

Rider Whitehead hit a field goal, three shots from behind the arc and two of his three free throws for a total of 13 points.