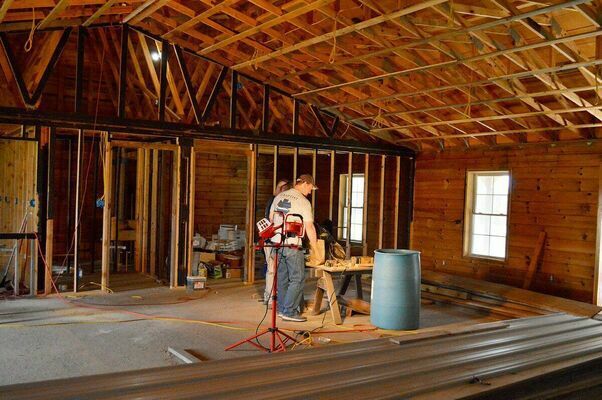 BUILDING FOR BOY SCOUTS – Twin Cities’ volunteers Kelly Stubblefield and Chris Fulcher were at the Boy Scout cabin on Monday, making progress on the cabin’s construction. Both men have close ties to the Boy Scouts of America program, and have been a part of the cabin construction project since its beginning. Contributions are still being accepted to reach the goal for completion. (Photo by Benita Fuzzell.) 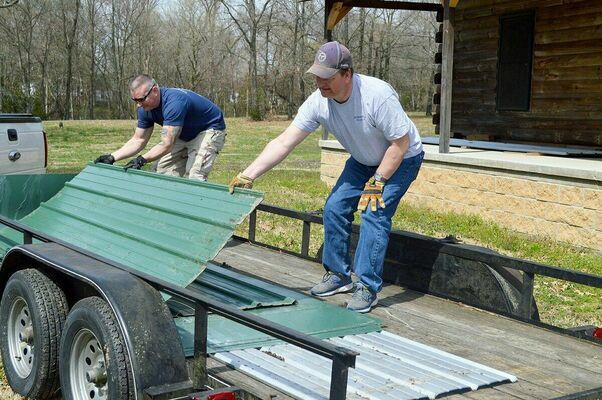 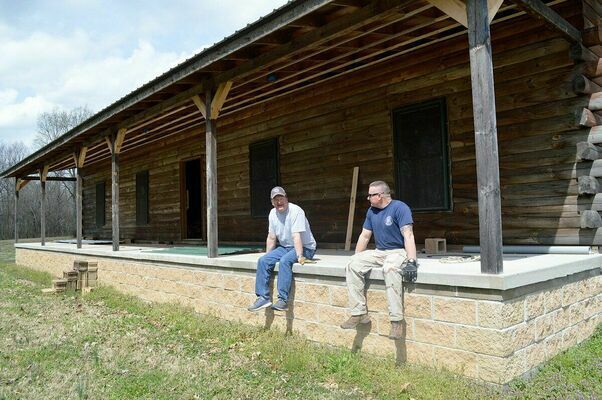 When volunteers broke ground for the Boy Scout cabin, to be built adjacent to the property occupied by the Fulton Police and Fire Departments, just beyond Lohaus Field in Fulton, back in 2014, those who were instrumental in acquiring the property for that purpose were optimistic as they prepared the budget for the structure’s completion.

According to Kelly Stubblefield and Chris Fulcher, two former Boys Scouts and volunteers in the cabin’s construction project, in the onset, it appeared there were multiple offers of assistance with funding and the donations of goods and services.

“We understood, from those who volunteered to perform some of the construction jobs, that their paid jobs would have to come first. But then it got to where we were waiting and waiting...We finally ended up having to pay for some jobs to be completed, because in the process, when one part was held up, the rest of jobs were being held up,” Stubblefield said, noting block laying and plumbing costs were not anticipated, and that drained a good portion of the donations initially collected.

He said the Boys Scouts did receive generous donations and volunteer labor, for portions of the construction such as the roof. They also have, on site, appliances and other accessories ready to be installed.

Stubblefield and Fulcher were at the site on Monday, unloading roofing materials.

For those interested in providing donations of material or in assisting on site with labor, Stubblefield may be contacted through email, at Kellystub19@gmail.com. While there is no set work day scheduled, because of varying work schedules of volunteers, those who would like to be notified of work days may contact Stubblefield at the email address provided.

“There is still lots to do, and help is still needed,” Stubblefield said.