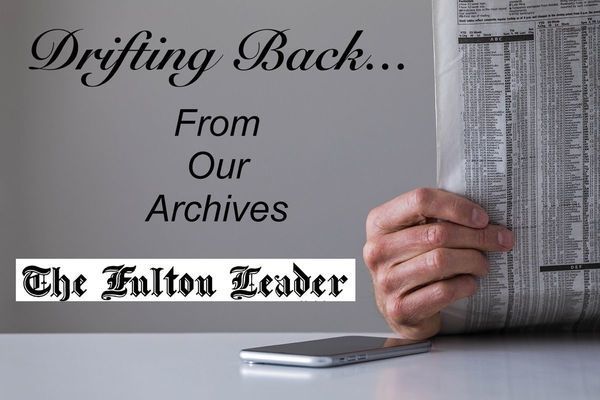 • Plans were in full swing for Weekend at Pontotoc’s Barbecue Cook-Off set for the weekend of Sept. 14-16, coordinated by Linda Dacus, for the Tourism Commission. A highlight of the Weekend At Pontotoc event will be a Community Millennium aerial photo, where the public will gather at Pontotoc Park, for a photo by William Mitchell, courtesy of local pilot Lenny Hohlbein.

• Obion County Schools and the Obion County Board of Education invited the public to a retirement reception to honor local School Board member Johnny Jones, for his 24 years of service.

• Fulton Furniture and Appliance on Walnut Street in Fulton was the Chamber of Commerce Business of the Week.

• Reggie Woolf, son of David and Denise Woolf, hit a hole in one on the 18th green of Fulton Country Club’s Junior Golf tournament.

• Kentucky Transportation Cabinet announced plans to host a public meeting Aug. 31 at Fulton’s Pontotoc Community Center, for discussion on a proposed plan for I-69.

• Jennifer “Jenny Lynn” Melton, 16, of South Fulton, daughter of Jim and Tammy Melton performed at “On Broadway In Paducah”.

• Playing at the Cine Theater in Martin, Tenn. was Space Cowboy, Coyote Ugly, Hollow Man and Nutty Professor 2, the Klumps.

• Vincent Yates, son of Jason and Lisa Yates, was honored on his second birthday with a Blues Clues themed party.

• The City of Fulton received $3,396 in Area Development Funds for renovations to Pontotoc Park community center. On hand for the presentation of the check was Rep. Charles Geveden, Fulton Mayor Elaine Forrester and Fulton City Manager Brian Hightower.

Letter to the Editor - Marlena Sipes