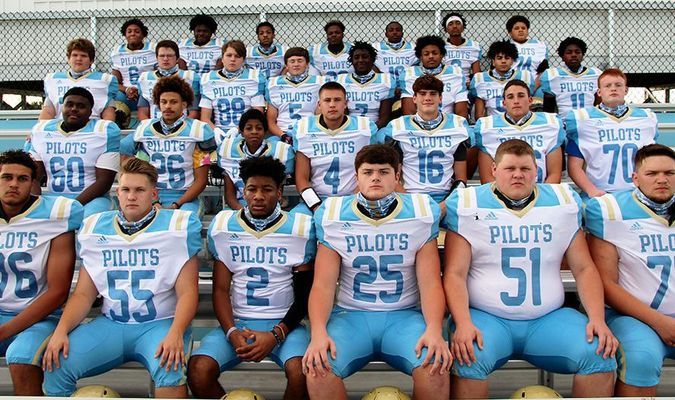 2020 PILOTS FOOTBALLl – The Fulton County Pilots will begin their 2020 season on Friday night, when they travel to face the Union City Golden Tornadoes. The Pilots are coming off of a 6-5 season and have eight returning senior players. (Photo by Charles Choate)

It’s taken many days, with many twists and turns, to get to this point.

But finally, it appears high school football in Kentucky is going to start.

This Friday night, the Fulton County Pilots are scheduled for their opening kickoff, when they travel to Union City to take on the four-time state champion Golden Tornadoes.

But getting to this point has been quite the roller coaster for coach James Bridges.

“Yes it has been real tough, but we know who is in charge so we will be alright.” said Coach Bridges at a practice last week. “You look out here and see 30 kids playing, one of the biggest numbers we have had in a long time. We are just ready to play. On Sept. 11, if the Good Lord is willing, we will be playing.”

Bridges said the delay for starting the season, and even the way practice could be conducted, has not hampered his players.

“We are going to be ready. The kids are ready. We finally got to put on some shoulder pads. We are going to hit this week and play this Friday. It’s just one step at a time. We have gone through you know, you are playing, and then you are not playing. It just been here and there.”

One thing for which this year’s Pilots have maintained a sense of loyalty is to show up, get in the work, and hope for the best.

“Since June 15 our kids have been here at practice. If you drove by, you saw our guys out here doing the things we could do. We have conditioned, and stayed in our small groups. Then we were able to get into larger groups. We are just getting ready. We are ready to play. I tell you, these guys are ready to play.”

Coming off of a 6-5 season in 2019, Coach Bridges said the team returns skills at many positions.

“Lot of talent back. We are missing a couple of players from last year, but we are talented. We have DiAvian Bradley, who can run the ball. Broc Bridges who can catch at tight end, then add in Josh Cole and Deivyn Turner. We have a ton of kids and probably the best offensive line around. They are all back with the exception of Kyle Bridges. We will be ready to push somebody around.”

As far as holding the opposition, the Pilots are fast and talented on the defensive side of the ball.

“Our defense is stacked. We have two players who were the top sack players in the state in Class-A last season. We have a great defensive line that is going to cause pressure in the middle, we have strong linebackers, and we have two of the best corners, I believe, in the state of Kentucky. We will be ready.”

A weapon the Pilots return, unlike many high school teams, is a strong kicker.

Bridges said Jordan Pirtle was a bright spot for last years team, and returns even stronger this year.

“We do have one of the best kickers. They were talking about the Carver kid over at Westview, and I said I have one who puts it in, or over the endzone also. Jordan Pirtle is phenomenal, and he is going to play offense and defense for us also.”

The Pilots may have received some early motivation, when coach Bridges was told of a prediction for his team this season.

“I have seen where they say we will go 1-8 this season. You know what I say, I have this written down everywhere for the kids to see. They have it in their minds. We are not going 1-8. We do have a tough schedule, and some of those games can change. We have to be prepared. You never know now. You just have to stay prepared.”

As far as the KHSAA’s recent vote to allow Fall sports to be played, coach Bridges said many people are grateful for the chance to line up and play.

“We are just glad to have the opportunity. It’s big time. Commissioner Julian Tackett had his ducks in a row. We are proud of their decision. We got 30 kids that this decision benefited. Now we are going to do our part to make it work and have a good year.”

Kickoff for the Fulton County at Union City game will take place this Friday at 7 p.m., at War Memorial Stadium.