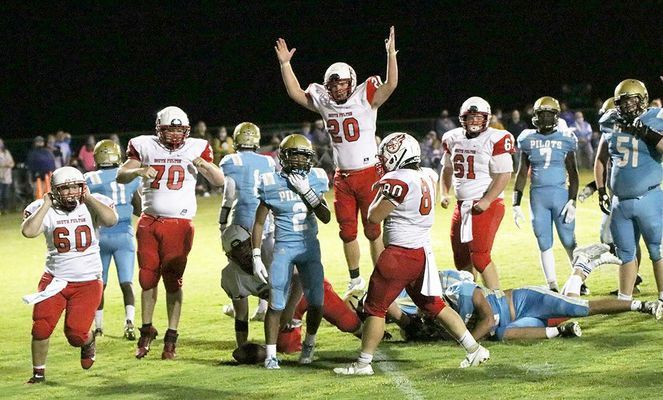 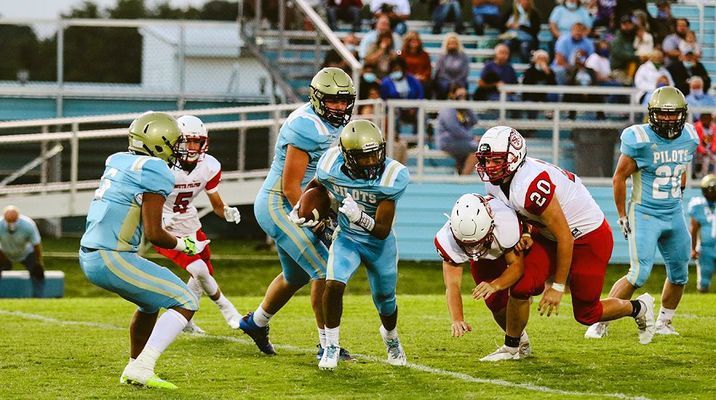 TOUGH RUNNING - Fulton County running back DiAvian Bradley, right, finds his lane blocked by South Fulton's Cade Malray (7) and Brock Brown (22) during the fourth quarter of their game in Hickman. Bradley rushed for 61 yards on the night for the Pilots, but the Red Devils posted a 6-0 win in overtime. (Photo by Charles Choate) 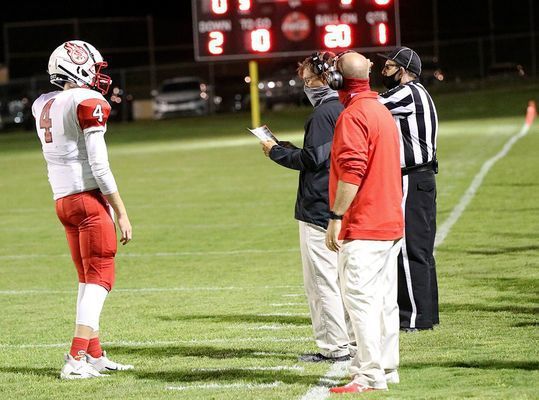 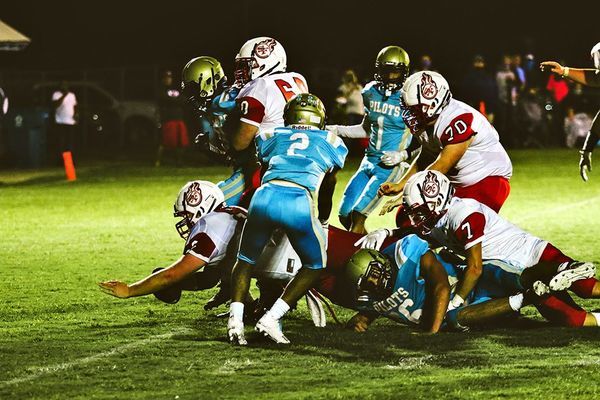 Following four quarters of play at Sanger Field, the scoreboard read exactly as it started, 0-0.

It was not until the Red Devils Mason Harper scored on an eight-yard run in overtime, that a winner was determined on the night.

“This game was exceptional,” said South Fulton coach Eric Knott. “This was an old school ballgame where the defense dominated. When we had the ball, we averaged about three yards a play, and they did the same thing. You get some drives going, then the defense would stiffen up, and hold each other out of the endzone. We both had our chances, but the defenses rose up.”

“This was just a different kind of game,” said Pilots coach James Bridges. “I have never been in a scoreless game before. Nothing to hang our head about. Our defense played really well, but the offense sputtered a bit. It was just two teams going after each other and a really hard played game.”

During regulation play, both teams crossed the endzone once, both denied by holding penalties.

“I was really impressed how fast Fulton County was,” said Coach Knott. “Their recovery speed was unlike anything I have seen in a while. There knowledge of where we were going with the ball was exceptional. They have really done a good job with the defense.”

“That was the first time since I have been coach. I haven’t seen anything like that. As far going into overtime, I felt like we could hold them out if we could cover and get the pass rush. During the game, I had held back a play or two, and a formation, and could see that Mason (Harper) was like Earl Campbell back in the day. He was building momentum with each of his runs and was wearing them down. That is what we did in overtime was to have an unbalanced formation, and then had an extreme unbalanced formation with a quick snap, which we scored the winning touchdown on.”

With the Red Devils entering the game at 0-2, Knott said the win was something his players needed.

“It was huge. The kids are killing themselves everyday in practice and to be good enough to almost win, you could tell it was starting to weigh on them and wear on us. The mistakes start compounding and then they get that look on their face. I say that this is the first time in over a year that I have seen them play with that much intensity, and not get down on themselves when a mistake was made. It was happiness for the win and the team. I think this is going to go a long way to help us get moving in the right direction.”

Coach Bridges said the teams effort was good, considering the lack of preparation going into the season.

“We have to find something to get them going. We need that spark. On some plays our offensive line was strong, and other times they blew past us. We are still just three weeks in on shoulder pads. We are still behind the eight ball. A lot of people don’t understand that some teams are five teams into playing, and a month of practice on top of that. But it is what it is, and we will be okay.”

Despite the loss, which dropped the Pilots to 0-2, Bridges still complimented the defensive play of his team.

“Our defense was just swarming the ball. We had Broc Bridges, Dylan Hammond and Tyler Love with 39 tackles. The defensive front was just leading the way. Those guys were racking them up. It was big time. Four sacks and seven tackles for a loss. But we didn’t come out on top, so we just have to get better.”

During the game, both teams combined for only 227-yards of total offense, with South Fulton at 139 and Fulton County 88.

For Fulton County, DiAvian Bradley had 61-yards of rushing.

Dalton Morris led the South Fulton defense with eight tackles, one sack and one interception.

The Pilots had Broc Bridges and Tyler Love record 12 tackles each, and Dylan Hammond leading all tacklers with 15.