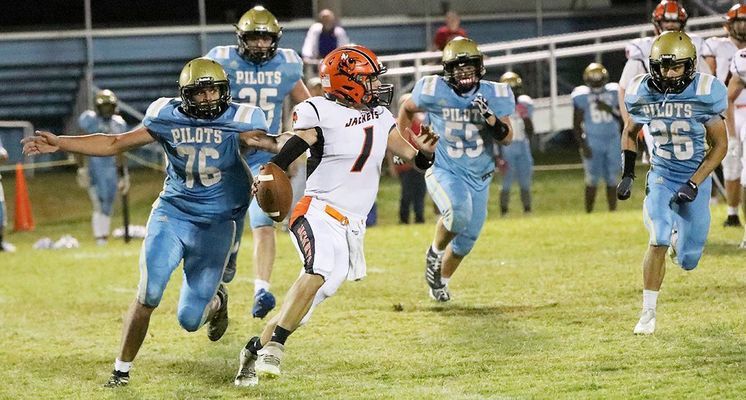 The Yellow Jackets jumped out to an 18-0 halftime lead, but had to hold on late to beat Fulton County 20-18 at Sanger Field.

“We came out after halftime and changed some things on defense,” said coach James Bridges of the rally in the second half. “They (Greenfield) only got a safety on us in the second half. Our guys responded like we asked them to. We shut them down when we moved Tyler Love over the center and it worked. We just needed another score. But it didn’t happen.”

The Yellow Jackets took a 6-0 lead at 4:28 of the first quarter, when Will Harris threw an option pass to quarterback Baker Porter.

At the 8:48 mark of the second quarter, the Tennesseans increased their lead to 12-0 on a Kiah Reynolds seven-yard pass reception from Porter.

The final score of the first half came when Porter crossed the goal line with 3:07 before halftime.

The second half was a complete turnaround for the Pilots, with Jequan Warren intercepting a pass and scoring from 30 yards out.

With 3:41 remaining in the third quarter, quarterback Max Gibbs bolted into the endzone on a one-yard run.

The closest the Pilots could get in the game came in the fourth quarter, when Dylan Hammond tackled Porter in the endzone for a safety, making the score 18-16.

Greenfield closed out the scoring with 1:18 to play, when Gibbs was attempting to gain a first down and was stripped of the football.

A scramble for possession ended in the endzone, with the Yellow Jackets getting a safety for the final score of 20-16.

Coach Bridges said the Pilots defense spurred the second half rally, which came up just short.

“What got us going was Jequan (Warren) making that interception and scoring. Max (Gibbs) gave us a big play on a run and later put it in the endzone. These guys haven’t laid down in three games. They are going to play hard. We just need to put four quarters of play together in a game.”

This week the Pilots will remain at Sanger Field to take on Russellville in a district match-up.

“We have to score on offense. We need some early points, it will be big. We have some of the best cornerbacks out there. Josh Cole, Devian Turner and Jequan Warren. We need Broc (Bridges) and Dylan (Hammond) to come alive on that line. We have played up there about three straight years. It’s time for them to be here.”

Kickoff at Sanger Field will begin at 7 p.m.