Sky’s the limit for Cook’s eighth decade of life 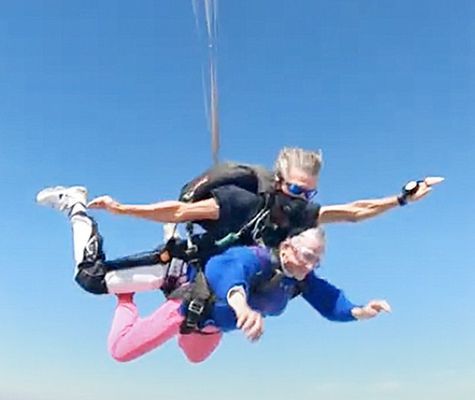 Cook is shown during the tandem skydive in mid-flight to celebrate her upcoming 82nd birthday. (Photo submitted) 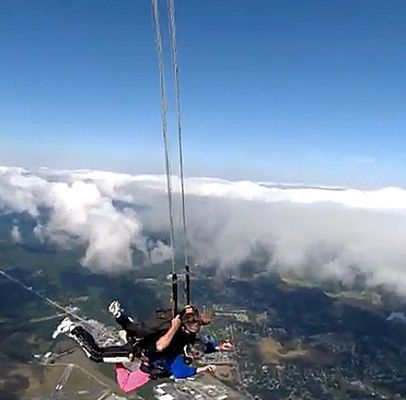 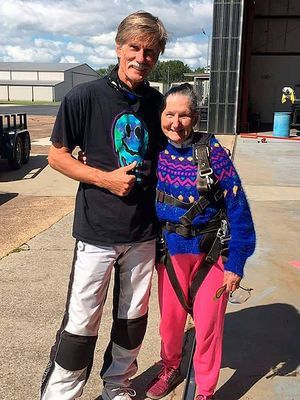 South Fulton’s Mattie Cook pauses with her skydiving instructor minutes before boarding a plane for her first skydiving experience. (Photo submitted)
Previous Next

With age and the addition of birthday after birthday celebrated, it may become difficult to respond to a question about a hoped-for gift or most desired wish.

After all, there are only so many opportunities to wear a diamond tiara or chiffon ball gown. A voyage upon the Queen Mary is so dependent on weather, after all. Who cares about a sports car able to achieve accelerations in excess of the speed of sound.

Past childhood celebrations of party games and sleepovers, on into the Sweet 16s, past the “legal age” 21st, and even the half century and retirement birthdays, those who reach their 80-something milestone most likely have come to the conclusion there is no need for another gift.

Apparently, there appears to have been a trend shift from pristinely wrapped presents, to actually being IN the present, with gifts of experiences, such as trips, concerts, sporting events and the like, the preference.

Mattie Cook of South Fulton, who will celebrate her 82nd birthday this December, definitely followed that trend recently, as she had what she refers to as the experience of a lifetime, when she was able to participate in a tandem skydiving adventure in Tullahoma, Tenn.

It was her third attempt to leap from a plane, with two previous tries unsuccessful due to weather conditions.

“I said this time, before we left for Tullahoma, I was going to pack an overnight bag, because I was going to be staying there until I was finally able to do it,” she said.

Skydive Tennessee in Tullahoma, just outside Nashville, provides instructional videos and demonstrations prior to participants boarding the plane, both of which Mattie has viewed and observed more than once.

She said her instructor and partner “in the fall” was excellent in providing her with all the tips to assure her skydive would be memorable.

“He had said I would need to take out my hearing aids, which I did. So, at first, it was a little hard to hear what he was telling me to do when we first started the dive. But then I was able to adjust and I did everything he told me. I was supposed to be putting my arms straight out to my side, like I was flying, but that was a little hard to do because the wind was so powerful. There was a little bit of a jerk when the parachute was pulled, but it was not bad,” she said.

“Going through the clouds, that was just beautiful,” Mattie added, but she also said she had to “get on to him a little” when he decided to perform some high flying stunts and spins.

“I told him he was going to have to quit that because that was making me dizzy,” she said.

And the landing? According to the first time skydiver, it was smooth as silk.

“My instructor made sure no part of my body touched the ground, except for my feet and legs. It did not hurt one bit,” Mattie said.

The idea to skydive had been one that was discussed some years ago by Mattie and her sister’s Pastor, the late Bro. David Bayer.

“My church had stopped having Sunday night services, so I decided to start going to Sunday night services where my oldest sister and her son attend, at Fulton Presbyterian Church in South Fulton. Bro. David Bayer was the preacher then. He and I just got to talking one time about skydiving and he said he had always wanted to do it. I told him if he did it, I would do it. I wish he would have been able to do it with me,” she said.

Mattie Cook has been an employee of Fulton’s McDonalds for 25 years, often manning the drive-through window.

She considers herself to be in good health, and believes she just might have a few more “experiences” to test out in her 80s. She said she never felt nervous or afraid during the skydive, and really can not think of many actual fears she experiences, with the exception of one.

“One time my late husband brought home a Harley-Davidson motorcycle. I told him there was no way I was going to get on the back of that thing. That would scare me to death,” she said.

“Some of my grandchildren have said they wouldn’t mind to skydive, so I think if they wanted to do it, I would do again with them. But I think my next thing is going to be that Skybridge in Gatlinburg. I think that would be something fun to do,” she said.

No need to put candles on Mattie Cook’s birthday cake. She’s determined to make her own wishes come true.

NON-PROFIT'S EXECUTIVE DIRECTOR ON MISSION DOWN...