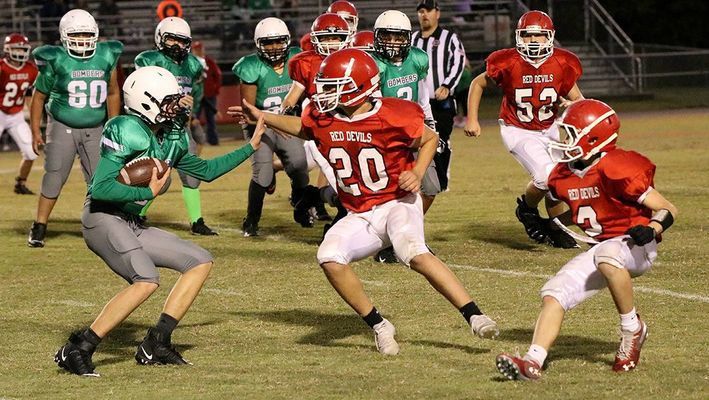 The South Fulton Jr. Red Devils completed a stellar football season with a championship in the Reelfoot Conference.

On 8th Grade Night at South Fulton, the Jr. Red Devils celebrated in a big way with a 44-12 win over Ballard County.

In the first quarter, South Fulton took a 16-0 lead thanks to a Brady McFarland 24-yard pass to Dane Cirkles, with McFarland later scoring on a 35-yard run.

In the second quarter, Charles Mulcahy made the score 24-0 on a 16-yard run, and McFarland closed out the half with a 24-yard scoring pass to Cirkles.

In the second half, Kaedyn Haynes put South Fulton in front 38-6, when he connected on a six-yard touchdown pass to Harley Nagel.

The Jr. Red Devils closed out the game with Haynes scoring on a 65-yard kickoff return.

On the night, Trevor Stunson was the Jr. Red Devils leading rusher with 43-yards, while Kaedyn Haynes led the defense with five tackles.

In the final game of the season against the Jr. Bulldogs at Gleason, South Fulton took a 16-0 lead at halftime on Dane Cirkles touchdown runs from 33-yards and 22-yards.

In the third quarter, Brady McFarland made the score 24-0 on an 18-yard run, with Cirkles closing out the game, and the season, with his third touchdown from one-yard out.

In the season’s final game, Dallas Whitehead rushed for 102-yard and made nine tackles in the win.