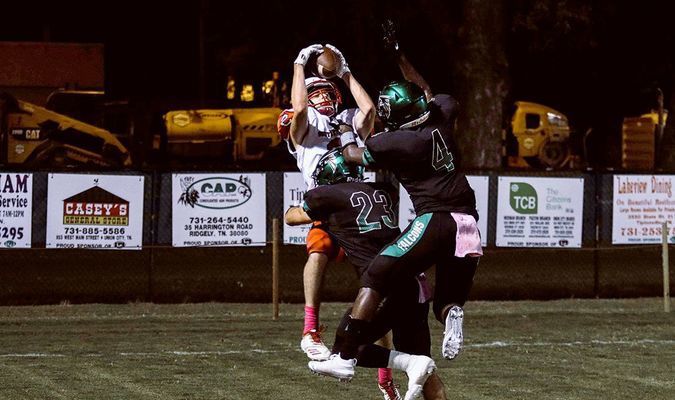 The two teams played to a 6-6 tie at halftime, thanks to a Bryce McFarland three-yard touchdown run with :45 seconds to play before the intermission.

The Red Devils then found themselves behind 18-6 in the fourth quarter, before McFarland connected with Rider Whitehead on a 45-yard scoring pass with 2:53 to play.

“I really felt good at halftime,” said coach Eric Knott. “We had a horrible week of practice, but we had some who were ready to play ball. They understood that we could play with them. Dalton Morris played his best game of the season. Cade Malray and Drew Barclay each had nine or 10 tackles and were sticking some people. Our defense was strong.”

Coach Knott said the third quarter has been a thorn in the side for the team all season.

“Look at Dresden, Greenfield, Stewart County and now Lake County. We have basically lost those games with our play in that quarter. That’s the aggravating part of our games. It seems like we make our most costly mistakes, and give up our biggest play in the third. It has been frustrating.”

“It seems like we just can’t get over the hump. We are fighting to get there. We are playing good enough on defense to win, but again we just are not explosive on the offensive side. It is a time for our seniors to really step up. We put in some younger players last week and they responded well. Hopefully we can turn this thing around and get into the playoffs. We need to win the next three games. I told the guys that as of now, we are in the playoffs. It’s up to us to make it remain that way.”

South Fulton will play host to Humboldt on Friday night for Homecoming.

Kickoff will begin at 7 p.m., with Homecoming ceremonies to take place at halftime.