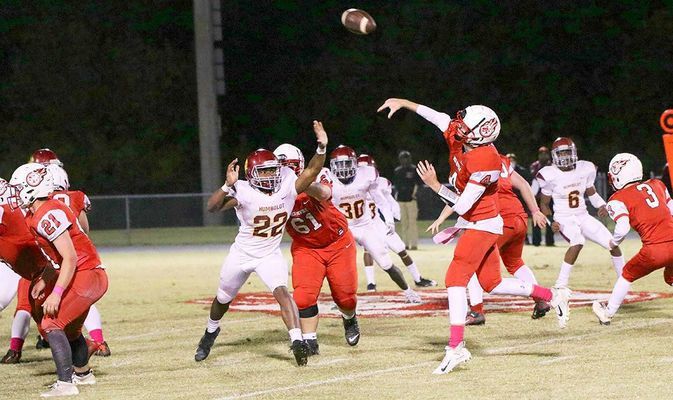 Humboldt’s Isaiah Agnew (22) tries to defend a pass by South Fulton quarterback Bryce McFarland (4), during the first quarter of play last Friday night. McFarland threw touchdown passes to Rider Whitehead and Beau Britt, and helped guide the Red Devils to a 20-8 Homecoming win over the Vikings. (Photo by Charles Choate)

The Red Devil’s Brock Brown (22) intercepts a pass intended for Humboldt receiver Trimond Woodruff (14), during the second quarter of their game last Friday night at South Fulton. Brown picked off two Humboldt passes on the night, as South Fulton kept their playoff hopes alive with a 20-8 win. (Photo by Charles Choate)
Previous Next

The Homecoming Night win gave coach Eric Knott’s team their first region win of the season, and upped their record to 2-5.

With the win, South Fulton must now win their two remaining games to earn a post-season berth.

“Step number one good, now we have to take a big giant step for number two to face West Carroll,” said coach Knott about the teams playoff goal. “They are putting up about 42 points a game and giving up about the same amount of points we are. But you know, we scored twenty points against this Humboldt team. We are going back to the drawing board to get some things corrected because we need second half scoring also.”

The Red Devils showed a big spark on offense in the first half against the Vikings.

Brock Brown gave South Fulton a 6-0 lead at 7:59 of the first quarter, when he crossed paydirt on a nine-yard run.

With 1:21 to play in the quarter, Bryce McFarland connected on a 33-yard touchdown pass to Rider Whitehead upping the lead to 12-0.

On the first play of the second quarter, Humboldt’s Kylan Johnson got the Vikings on the scoreboard, when he threw a 48-yard touchdown pass to Bobby Johnson.

With the two-point conversion, Humboldt cut the South Fulton advantage to 12-8.

The Red Devils closed out the games scoring with 5:02 remaining before halftime, when McFarland threw a 35-yard touchdown pass to Beau Britt.

The win was a big boost to the Red Devils, who have played several close games this season.

“We had to have it,” said coach Knott. “You have to feel good about it. Every now and then it takes something good to get it going in the right direction. Yes, I am hard on them, but I love on them just as hard also. I just want them to learn there is a right way and a wrong way to do things. I will sure let them know when we don’t do it right, but I also let them know when they do things right. We did a lot of things right on the field tonight. And we have a win to show for it.”

Coach Knott also had strong praise for the team defense, who have played well throughout the season.

“The discipline that our guys had tonight. Brock (Brown) staying where he was to get the two interceptions, Rider (Whitehead) being physical on the edge, the linebackers doing what they were doing and our ends were perfect in containing the quarterback. When you have somebody running around back there like DeShaun Watson, who can make some plays, I was extremely proud of the discipline we showed on defense.”

South Fulton produced 271 yards of total offense, while holding the Vikings to 109 total yards and only three first downs.

Drew Barclay led the team in rushing with 56 yards, followed by Beau Britt 51, Dalton Morris 27, Brock Brown 16 and Will Clapper 10.

On the defensive side, Dalton Morris led the way with seven tackles, Mason Harper had six, with Dylan Ransom and Moses McKnight each adding four.

According to South Fulton High School Red Devils Football Coach Eric Knott, the game previously scheduled with West Carroll for this Friday, Oct. 23, has been rescheduled and moved up one night to Thursday night, Oct. 22, at West Carroll. Game time is 7 p.m