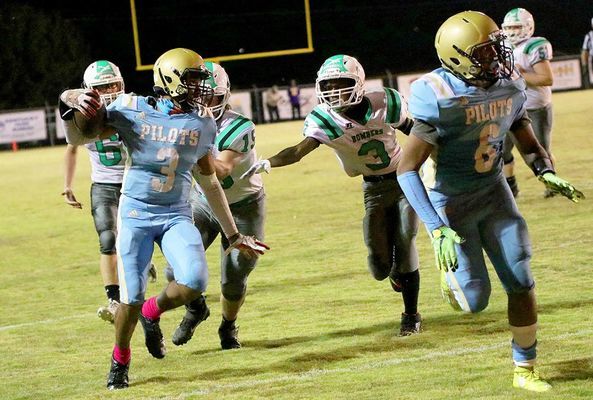 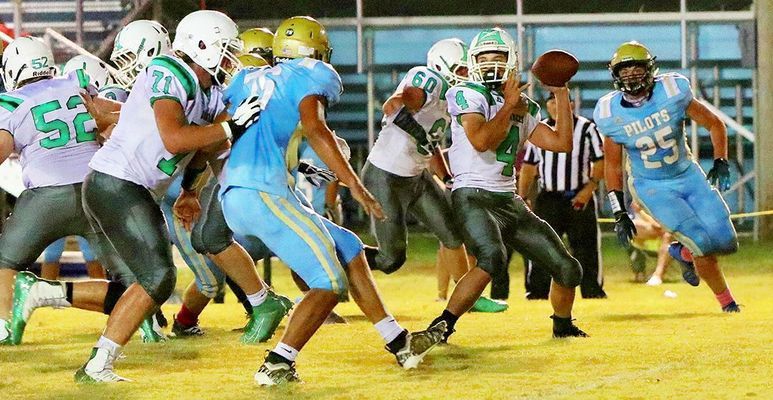 DEFENSIVE PRESSURE – Fulton County's Broc Bridges (25) and Dylan Hammond (75) pursue Ballard Memorial quarterback Matthew Jenkins (4) during their game last Friday night in Hickman. The Pilots held the Bombers to only 11 yards of total offense on the night in a 62-0 win. (Photo by Charles Choate)
Previous Next

The game was actually over early, as Fulton County took a 40-0 first quarter lead.

Deivyn Turner started the rout by returning the opening kickoff 83-yards for a touchdown.

The Pilots defense got in the scoring column, as Broc Bridges recovered a fumble and scored from nine-yards out for a 20-0 lead.

Still in the first quarter, DiAvian Bradley crossed the endzone on a 13-yard run, with Turner scoring his second touchdown of the period on a 36 yard punt return.

With :44 seconds remaining in the period, Fulton County made the score 34-0 on a safety, with Bradley then adding his second touchdown on a 17-yard run.

In the second quarter, Bridges scored his second touchdown on a six yard pass play, with Cole also scoring for the second time on an eight-yard run.

The Pilots had a total of 199 yards of offense in the win, while holding the Bombers to only 11 yards of total offense.

On the receiving end, Jequan Warren had one catch for 40 yards, with Cole catching one pass for 19 yards.

Also having big games on the defense was Bridges with seven tackles, Gordon six and Dylan Hammond six.

With the win, Fulton County is now 1-4 and will face district opponent Russellville on Friday night.

The Panthers come to Hickman on Friday night with a 3-3 record.

Kickoff for the Homecoming game will begin at 7 p.m.