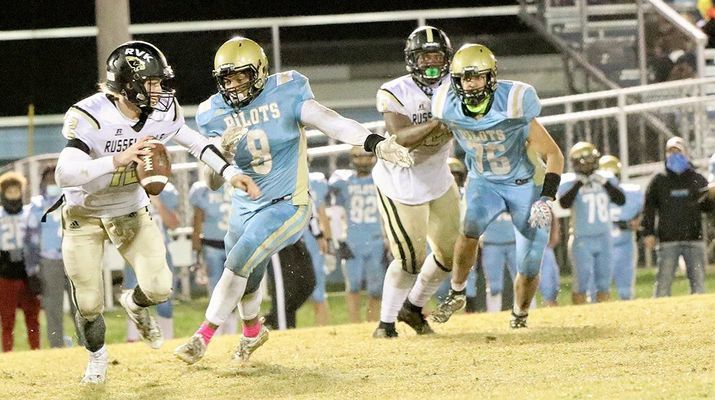 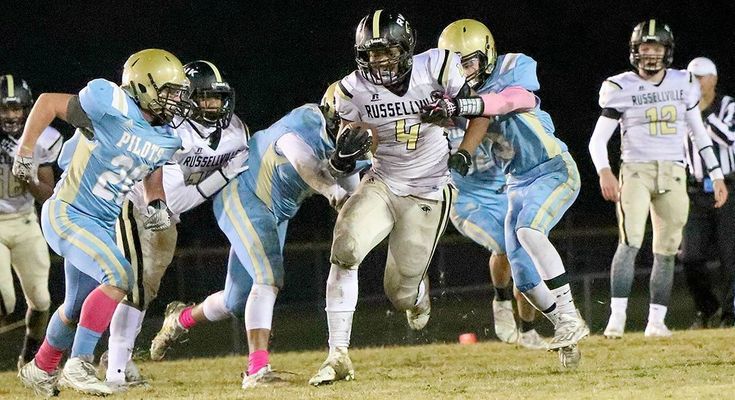 GANG TACKLE – Pilots linebacker Luke Jackson (20) comes into the play to stop Russellville running back Jovari Gamble (4). Gamble rushed for 129 yards against Fulton County, as the Panthers escaped with a 21-20 win at Sanger Field. (Photo by Charles Choate)
Previous Next

A win by Fulton County could have secured a first round playoff game at home, with the Pilots now faced with a road trip in two weeks.

All of the game scoring occurred in the first half, with Russellville taking a 7-0 lead in the first quarter on a one-yard run by Lennon Ries, followed by the extra point kick.

Following the score by Ries, Fulton County’s Deivyn Turner took the next kickoff 74-yards for a touchdown, cutting the lead to 7-6.

In the second quarter, Ries threw a 14-yard touchdown pass to Josh Allen, giving the Panthers a 14-6 advantage.

The Pilots again countered, with Chrisshawn Gordon crossing the endzone on a 20-yard run and score of 14-12.

With 5:44 remaining in the quarter, the Panthers defense put points on the scoreboard when Xavier Coleman intercepted a pass and scored from 36-yards out.

The touchdown and extra point gave Russellville a 21-12 lead.

Fulton County ended the games scoring with no time left on the clock before halftime, when Turner caught a 14-yard touchdown pass.

The Pilots Bentlee Johnson then made the two-point conversion for the 21-20 score.

On the defensive side, Tyler Love and Dylan Hammond each had 11 tackles, with Gordon adding 10 and Bridges recording 9.

With the loss the Pilots dropped to 1-5, while Russellville improved to 4-3.

This week Fulton County will play host to the 7-1 Mayfield Cardinals, who are currently ranked No. 2 in the state in Class-2A football.

Kickoff at Sanger Field will begin at 7 p.m.