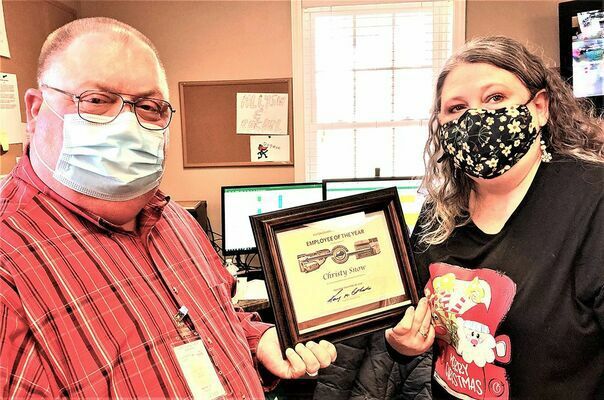 Christy Snow was recently named the Fulton County Transit Authority Employee of the Year for 2020 by FCTA Executive Director Kenney Etherton with her Dispatch/Call Taking co-workers and several others on hand for the presentation. Employee of the Year is chosen from secret ballot voting by FCTA employees.

“It’s a team effort,” Snow said after finding out she was the recipient of the award. “I couldn’t do it without them (Dispatch/Call Takers).”

Recognized at FCTA for her high work ethic, Snow said she is just “work oriented” and “just does her job.”

Snow has continued to “just do her job” - even in the throes of a COVID-19 pandemic.

“It has been a crazy year,” Snow said, smiling.

Snow will mark her third year at FCTA in April 2021. She is currently Co-Dispatcher/Call Taker at the agency.

Born in Fulton, she is the daughter of Walter and Freda Bequette. She is married to Michael Snow, and they have three children: Elizabeth, Brandon, and Alayna.