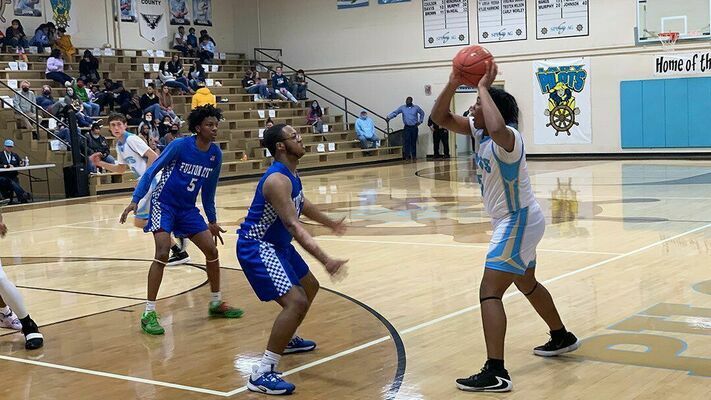 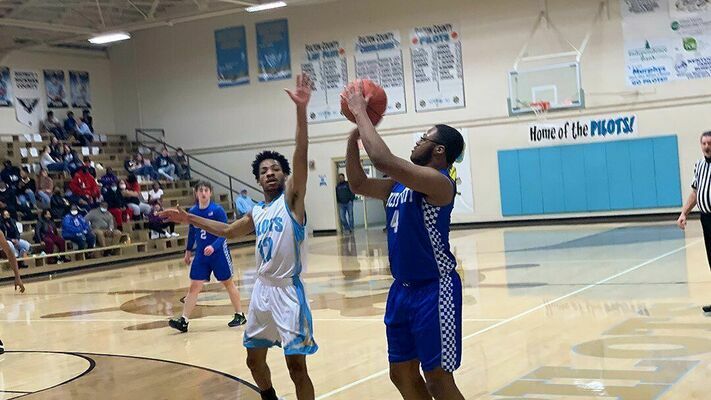 ATTEMPED LAUNCH – Fulton City High School’s Ladarius Coble attempts to get a shot off over the outstretched hand of Fulton County Pilot Josh Cole during their match-up Feb. 5. (Photo by Mark Collier) 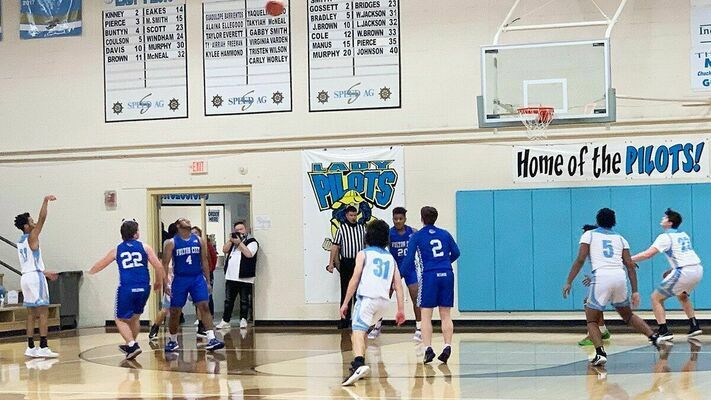 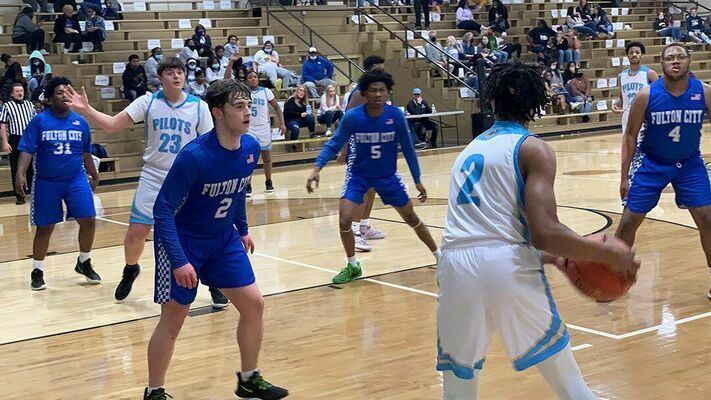 After winning their first game of the season Jan. 21, the Fulton County High School Pilots had not played since due to COVID-related issues. The Pilots finally returned to action and extended their winning streak this past week by hosting and defeating their cross-town rival Fulton City High School Bulldogs and the Ballard Memorial Bombers.

Josh Cole got the Pilots off on the right foot when he hit a three to open their game against the Ballard Memorial Bombers Feb. 8. Both teams battled back and forth during the opening quarter of play, and the Pilots led 18-17 after the first eight minutes of play.

The Pilots went on a run and extended their lead to 35-24 with 2:07 remaining in the second quarter, and both teams added two points to their score as the Pilots led 37-26 at halftime.

Cole also scored the opening basket of the second half on a fast-break lay-up, and the Pilots never looked back as they led 58-38 at the end of the third quarter.

The Pilots outscored the Bombers 14-7 in the final quarter to pick up their third straight win.

Cole led the team in scoring with 22 points, including five of the team’s seven three-pointers, followed by Gossett with 17, Hayden Murphy with 13, Bradley and Wesley Brown with seven each, Corey Manus with three, Bridges with two, and Pierce with one.

The Pilots grabbed 31 rebounds, with Murphy leading the way with seven, Wesley Brown and Bradley with five each, Bridges and Manus with four each, Gossett and Cole with two each, and Jamarius Brown and Pierce with one each.

After having their first scheduled game Jan. 22 postponed due to COVID, the Fulton County High School Pilots and Fulton City High School Bulldogs finally met on the hardwood Feb. 5 when Fulton City traveled to Hickman.

The Pilots started fast with Hayden Murphy scoring the opening basket, leading to a 7-0 lead in the opening minute before the Bulldogs were forced to call a timeout to regroup. Amire Hobbs scored the first points of the game for the Bulldogs at the free-throw line. At the end of the first quarter, it was the Pilots leading 21-8.

The Bulldogs opened the scored quarter with a 7-1 run to cut the Pilots’ lead to 22-15. However, every time the Bulldogs tried to cut further into the deficit, the Pilots had an answer. The Pilots led 40-32 at halftime.

After halftime is when the Pilots kicked things into another gear, outscoring the Bulldogs 27-6 in the third quarter with a dunk by DK Gossett to cap things off to take a commanding 67-38 lead going into the final quarter.

The Pilots added another 14 points to their score, with the Bulldogs scoring three in the fourth quarter.

Josh Cole led the way for the Pilots with 24 points, including six three-point baskets. Also scoring for the Pilots were Murphy with 19, DeAvian Bradley and Gossett with 13 each, Broc Bridges with four, Jamarius Brown and Drake Manus with three each, and Will Jackson with two.

Murphy led the way with eight of the Pilots 33 total rebounds, followed by Bradley with five, Gossett, Manus, Bridges and Jackson with four each, and Brown and Cole with two each.

Kabrian Burton had a team-high 14 points for the Bulldogs, including three three-point baskets. Also scoring for the Bulldogs were Hobbs with 12, Jordon Lannom with eight, Daveon Cheirs with four, and Ladarius Coble with three.

Hobbs led the Bulldogs with seven of their 30 total rebounds, followed by Chiers and Jackson with six, Coble with five, Lannom with three, Burton with two, and Tristan Lalley with one.