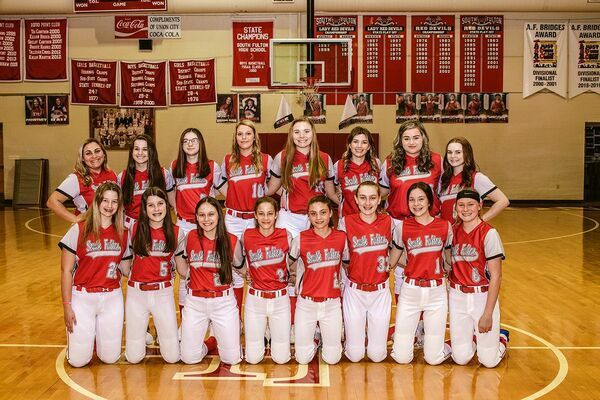 South Fulton High School Head Softball Coach Curt Lee is looking forward to finally being able to get on the field after only getting to play one game last year before the season was cut short due to COVID-19.

Coach Lee’s has big goals for the season.

When Coach Lee was asked what he hoped these five eighth graders added to his team, he said, “With a short roster of 10 kids, adding these five helps give us some more numbers in case of injuries or if someone can do a little better job than someone else.”

“We have four seniors this year, Elizabeth Archie, Stasia Madding, Halle Gore, and Marli Buchanan. Your leadership is always expected out of your seniors. We kind of want to ride the shoulders of Buchanan, with her pitching and her hitting, so she needs to be our leader on and off the field.”

This year we can expect to see Marli Buchanan, Mary Pitts, Stasia Madding, and Abbi McFarland on the rubber for the Lady Red Devils.

Coach Lee was asked what he believed his greatest asset was, he responded, “It’s hard to tell right now, it used to be our defense and our base running and a little bit of our hitting but this year with us being so young it’s going to be a slow process of finding out what our strengths are and trying to capitalize on those. We are probably going have to focus on our base running and defense because hitting is going to be a slower process for these younger girls.”

“Our biggest challenge this year is going to hitting and having the ability level of kids in the right positions. We are going to have some kids out of position, where I probably wouldn’t be playing them in other than a numbers situation.” Coach Lee said.

The Lady Red Devils opened up their season last Tuesday against the Westview Chargers.