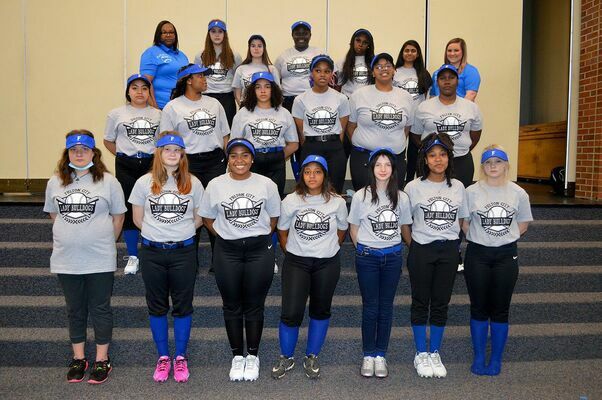 Melissa Clark, Head Coach for the 2021 Lady Bulldogs’ Softball Team barely took a breather between seasons, beginning to formulate the make-up of this year’s “Diamond Girls” only a few days after the Lady Bulldog “Queens of the Court” saw their basketball season come to a close.

Clark serves as Head Coach for both programs.

“We went right from one season into the next,” she said.

Coach Clark, similar to her counterpart, Boys’ Baseball Coach Chris Mason, was to take over the softball program for the Lady Bulldogs last year, but when covid shut down the program and then the doors of the school, she had to put the 2020 season to rest before it ever began.

It could be absence makes the heart grow fonder, or perhaps, in the case of the 2021 team, absence makes the roster grow larger, with a full 18-player listing, quantity-wise, the largest in recent years for any female sports program at the school.

Quality wise, the Lady Bulldogs are also not lacking.

“They are a good group of girls, they really are. In our team group chats, junior Takyra Taylor has emerged as a real leader. She has stepped up and really provided some motivation to the team,” Coach Clark said.

As the middle school softball program has been dormant for a number of years, the Head Coach has seen a surge in that age group, showing an interest and dedication to the program.

Mia Martin will be at first, with Elizabeth Pirtle to be stationed at second. Short stop duties will be on LeAndra Randle and Takyra Taylor will be at third.

Jada Martin, along with Randle and Taylor will alternate on the mound, throwing to Jadyn Watson behind the plate, at catcher.

“Our infield is strong. We are strong and athletic. Our outfield is not as strong, but we will be OK because these girls work hard,” Coach Clark said.

Right now, the Coach said she is seeing substantial improvements in the bats of Mia Martin, as well as Taylor.

“We have practiced quite a bit, but we really need to focus, beginning today, on our batting,” Coach Clark said.

Softball is actually Clark’s first love, she said, the desire and the skill set of the game having supplied her with a dual scholarship to further her education, playing softball and basketball at the college level.

She said she looks forward to the season, as the depth of her roster will allow for lots of opportunities for this year’s team to gain playing time, especially since a number of double headers are included for 2021.

The Lady Bulldogs begin their season March 30 against St. Mary, on the road, and then open at home April 16 against Lake County, Tenn. Lady Falcons.