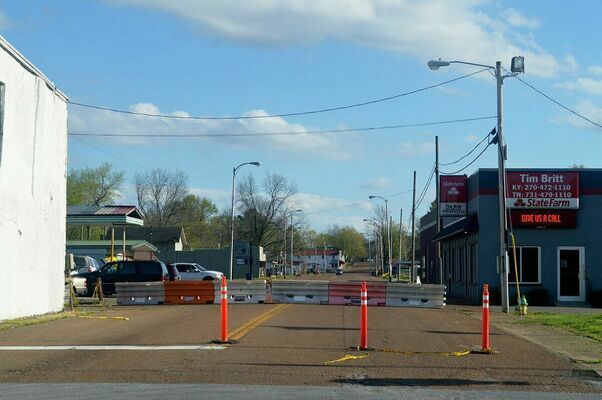 ROAD CLOSURE CONTINUES – A main intersection in the Twin Cities of Fulton and South Fulton remains closed following a January accident which damaged a structure located at the corner of East State Line and Broadway. The owner of the property, Gary Grooms is awaiting asbestos testing, and has indicated he plans to move forward with the building’s demolition, while following the required procedures. This photo is the view of Broadway in South Fulton. (Photos by Benita Fuzzell) 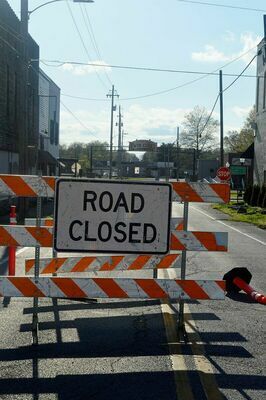 ROAD CLOSURE CONTINUES – A main intersection in the Twin Cities of Fulton and South Fulton remains closed following a January accident which damaged a structure located at the corner of East State Line and Broadway. The owner of the property, Gary Grooms is awaiting asbestos testing, and has indicated he plans to move forward with the building’s demolition, while following the required procedures. This photo is the view on East State Line in Kentucky. (Photo by Benita Fuzzell) 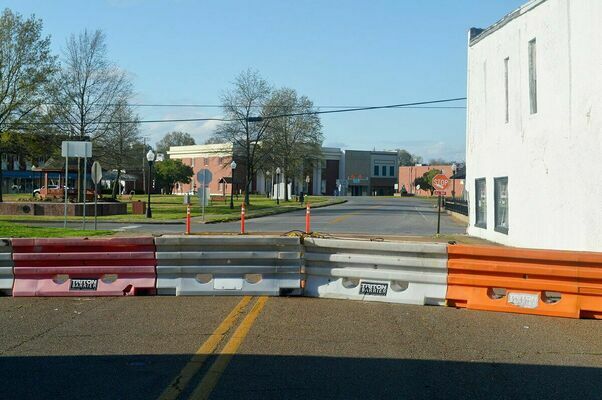 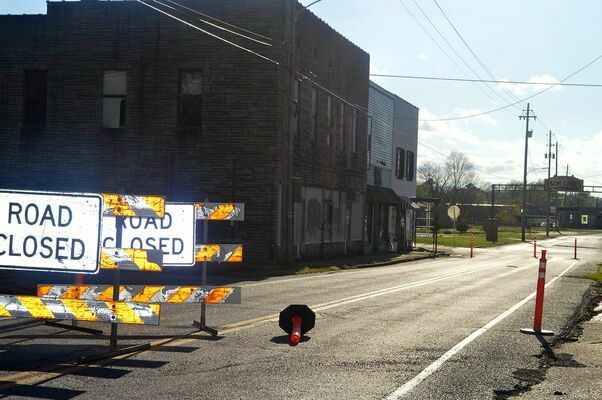 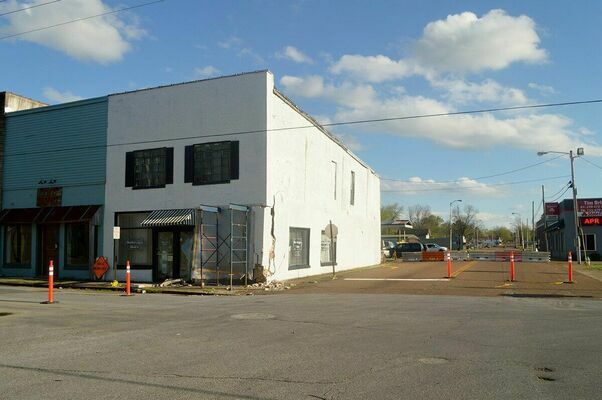 (Photo by Benita Fuzzell)
Previous Next

A one-vehicle accident which happened Jan. 14, and resulted in damage to a structure located at a high traffic intersection of the Twin Cities of Fulton and South Fulton, remains the reason the intersection is blocked and multiple detours are required three months later.

Although signage for detour routes was put in place at town’s entrances in January by the Tennessee Department of Transportation as well as by the Kentucky Transportation Cabinet, heavily loaded trucks and other motor vehicles must now make their way through both cities’ residential and business district streets, instead of using the intersection of Commercial Avenue and East State Line in Fulton, and Broadway/Hwy. 45S in South Fulton.

Keith Todd, Public Information Officer with the Kentucky Transportation Cabinet’s District 1, said on Monday, when traffic does not follow designated detour routes put in place, an enforcement issue could come into play.

“Our concern is the safety of roadways for motorists,” Todd said, adding that when his office is notified that the roadways are safe for motorists, the barricades may be removed.

Todd confirmed that emergency response agencies did notify the KTC District 1 office on the day of the accident, requesting street closures at the scene. He said the following month, KTC crews were at the site once again and determined some of the barricades previously put in place could be extracted.

Initially, Gary Grooms, the owner of the structure at the corner of Broadway and East State Line, which housed Buttercup’s Bistro, a restaurant now relocated to another building on Main Street in Fulton, had to determine whether the damage to the building from the impact of the vehicle, would be repairable and also, whether the structural integrity of the building would remain in tact. The alternative, pending inspection, would be to demolish the structure.
On Jan. 25, an email was received by Fulton City Manager Mike Gunn from South Fulton City Manager Johnny, wherein Michael Fincher, Sedgwick Claims Management Services, Inc. of Jackson, Tenn. provided a report for the Grooms property at 201 East State Line Road South Fulton, referencing EFI Global File Number 038.03153
The report, in part, states “On January 22, 2021, I conducted a visual inspection of the subject property that had been affected by the vehicle impact. This impact damaged the NW corner brick column. Subsequent shoring added additional supports under the lintel beam running along the front of the property above the store front windows. The building is currently being assessed for the extent of damages and the required repairs. The streets around the property can be opened to traffic provided that a single row of concrete jersey barriers is placed around the property with at least 10 ft clear space from the building exterior with minimum 4ft high chain-link fence on top of the jersey barriers.”
The report goes on to note “If 10 feet of clear space does not provide adequate traffic lane widths for the roadway, the distance to the barriers could be reduced to 6 ft and a 10-ft high screen constructed of chain link fencing supported by steel poles and steel cable could be constructed above the jersey barriers.”
. The signature line on the email report was Kursat Kinali, Ph.D., P.E. Principal Engineer

South Fulton City Manager Johnny Bacon said on Monday, he had been aware of the report, however the cost of constructing the proposed jersey barriers and chain link fencing totaled several thousand dollars, and he had not been able to be provided with who the responsible party would be, to absorb that cost. At that time, the city of South Fulton placed barriers as close to the intersection as possible, because according to Bacon, motorists were ignoring the signage for detours placed on Hwy. 45, and were continuing to drive north on Broadway, to the intersection where the damaged building was located.

In an email dated March 24, forwarded to Fulton City Manager Mike Gunn from Kyle Poat, an Engineer with the KYTC-District 1, from Jeremy W. Reed, Transportation Cabinet Staff Attorney III, District 1, office of Legal Services in Paducah, Reed stated he had spoken with Gary Grooms, the building’s owner, on March 24, and was told by him he had a demolition company for his building, but asbestos testing would be needed before demolition.

The email goes on to state “He (Grooms) said he hopes to have the building down within two weeks. I reminded him that when he gets ready to demo, he will need to contact us for traffic control purposes. I will follow back up at the end of March....I will be gone the first week of April, but will follow back up with him after I get back if he has not removed the building by then.”

When The Current reached out to the Kentucky Transportation Cabinet’s Frankfort office, a representative of that office provided the District 1, KYTC office number, Todd’s name and Poat’s name and email addresses.

Both Todd and Poat were copied in an email request from The Current for information, as to whether the KYTC had any authority to remove barricades in place in the vicinity of the intersection, and whether or not Grooms had been notified of any time frame by which repairs or demolition would be required to be performed to allow for the re-opening of the intersection.

As of Tuesday morning, no response had been received from Poat, and Todd had stated on Monday that the KTC had previously received information that Grooms was awaiting asbestos testing.

Todd also stated the KTC, nor his District 1 office, had established any time frame in which the demolition was to be completed or as to when the barricades would be removed to open the intersection.

The Current also contacted Nichole Lawrence, Region 4, Community Relations Officer, with the Jackson Office of the Tennessee Department of Transportation, as to any available updates regarding the reopening of the intersection, specifically as it applies to portions of Broadway/Hwy. 45S, and East State Line.

Lawrence stated “the property owner is waiting on asbestos testing. It is our understanding and Kentucky’s, that once the testing is complete, he (Grooms) has a contractor lined up for the demolition. I do not have a timeline for that. The property owner may provide more details. As far as opening the road, we will be able to do so on our end once the work is complete.”

Following that response from Lawrence, in accessing the Tennessee Department of Environment and Conservation, TDEC, website, under the “Demolition Guidance for Structurally Unsound Buildings” section, it addresses guidance to provide a summary of requirements pertaining to the demolition of buildings and the handling of asbestos containing materials when structures have been deemed structurally unsound and in danger of imminent collapse by a state or local government agency.

The section goes on to state “a building may be known to have asbestos containing products. Such products may include asbestos-sement corrugated sheet, asbestos cement flat sheet, asbestos pipeline wrap, roofing felt, vinyl asbestos floor tile, asbestos sement shingle, mill board, asbestos cement pipe, surfacing o spray applied materials, and vermiculite attic insulation. All structures both residential and commercial built before 1975 may contain significant amounts of asbestos.”
Kim Schofinski, Deputy Communications Director with the Tennessee Department of Environment and Conservation, in Nashville, said via email on Monday, following a telephone conversation with The Current earlier in the day “The local building codes department, a structural engineer, or any government official can determine if a building is structurally unsound. That is not something that TDEC officially determines.”
She did state to her knowledge no notification had been received by TDEC regarding the proposed demolition
and notification to TDEC is “required before demolition begins of all public/commercial buildings, no matter the age and even in the event no asbestos is found to be present.”

“Typically, the notification and asbestos survey are submitted simultaneously, but regulations do not specify a certain order,” Schofinski said.

South Fulton City Manager Johnny Bacon said he had been in contact with Grooms on more than one occasion, and had also contacted a number of potential contractors to perform the demolition and provided that information to Grooms.

He said to his understanding Grooms had a contractor lined up to perform the demolition but was awaiting asbestos testing to be performed.

Grooms said he had attempted to contact an office in Memphis regarding the testing, and had been told it was possible for the test to be performed this week.

He said to his understanding, the representative of a company out of the Memphis area he had contacted, was to be at the site to conduct asbestos testing at the end of the week.

Grooms was provided with the information obtained by The Current, as to required notification to the Tennessee Department of Environment and Conservation for the intended demolition, telephone numbers for Scholinski, as well as Tennessee’s Air Pollution Control’s Randall Harrison and Anthony Quantrine.

He was also provided with information to access the Tennessee Department of Environment and Conservation’s website where forms are available to complete and send in to TDEC, regarding Notification of Demolition and/or Asbestos Renovation, form number CN-1055.

“ I am ready to do what I need to do, to get it down, and go through the right channels, “ Grooms said.