Status of Hickman’s fireworks show will depend on funds available 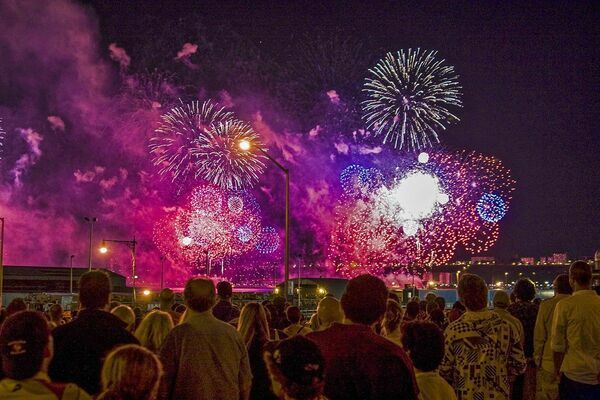 Michael Apperson, with Alliance Water Resources (AWR) asked Hickman’s Mayor and City Commissioners about an update as to the status of the city’s annual Fourth of July event, including a fireworks display, during the commission’s regular meeting Monday night.

When the topic had been discussed at a previous commission meeting, Apperson had indicated he could speak with his company regarding any possible assistance they might be able to provide, to help with the fireworks display.

“Donations for the annual fireworks display in July are requested by the end of April, or there will be no show this year,” Gannon said.

Hickman City Manager David Gallagher asked Gannon what minimum amount would be needed in order to stage the fireworks show.

“To make a show worth putting on, it will cost about $8,000. There is around $600 left over from last year and we are still working on it,” Gannon said.

No action was taken regarding the fireworks show.
Apperson reported in March, the Water Treatment Plant treated a total of 15,525,150 gallons of water, an average of 500,811 gallons per day.

“We repaired two leaks on Bernal Ave., and State Route 2139, jetted four sewers, and repaired eight streets with cold patch,” he said, adding construction work began at the Waste Water Treatment Plant, and the process has begun of lowering the lagoon to begin work on the aeration basin.

He also reported AWR has completed the process to switch to liquid fluoride.

“Hawkins Water Treatment Group came out to set everything up and had to order an injector and mesh for the system. The state is on standby to inspect it once completed. AWR is wanting to use the remaining powdered fluoride before the liquid switch for cost efficiency,” Apperson said.

Following discussion regarding the roof at City Hall, Commissioners agreed to seek bids/quotes on replacing with a 20-year roof and decide at a later meeting.

Gallagher reported the sewer project has started and was going well.

“They are getting ready to drain the lagoon and install the pumps for aeration once the sludge is removed,” he said.

“I talked with a Zito Media representative today and we need to meet and set up a conference call soon to put our concerns before them,” Gallagher stated.

He updated the commission on his plans to start working on the budget for the next Fiscal Year and informed the officials Department Heads should now finalize their project list and submit it for review.

Gallagher reported the Jetter truck was in working order again, and a Hickman resident has requested to have a parcel of City property located behind the Police Department transferred to the adjoining property owner, who has maintained the parcel the past couple of years.

“If we transfer the property, it will get it back on the tax rolls, and the cost of surveying and the deed will be the property owner’s responsibility,” Gallagher said.

Commissioners agreed to check with Hickman Fire Chief John Amberg to see if the parcel is used by the fire department and then make a decision.

“I have contacted Sen. Mitch McConnell, as he was a major factor in the repair of the bluff, who then contacted the Army Corps of Engineers,” Gallagher said, after reporting there were still several sink holes on the bluff.

Commissioner Hitesman asked, “At the Waste Water Project, who is the contact, that when it is done and they say everything is good, then a year from now we have questions, who do we go to?”
“Bob Pickerill, the engineer. Tybee Construction will fulfill their contract and as long as they follow it, then it will be the engineer’s responsibility,” Gallagher said.

During the Commissioners’ Report, Commissioner Gannon announced the Hickman Recreation Tourism Convention Commission (HRTCC) will have a fundraiser to sell five-pound smoked bologna Memorial Day weekend and those interested in purchasing any may contact any HRTCC member.

Commissioner Griggs said he wanted to give accolades.

“This is 911 Week. I want to recognize my co-workers and 911 dispatchers in the surrounding area, and Kentucky State Police. They all do a good job and work crazy hours,”he said.

“I want to congratulate Rob (Hitesman) and his crew at Insteel for their safety award, and South Seventh Grill for expanding and moving. Any time we can have industry and business doing good, we need to encourage it and be thankful for them,” Griggs said.

Carlton reported Bulk Pick-up by Republic Services, will be conducted for the residents of Hickman, April 19 and the same guidelines will be followed as before, including no pickup of Freon or hazardous chemicals. Items are to be placed away from power lines and mailboxes, he said, with the possibility of the process to take several days to meet the needs of the community, within the city limits of Hickman.

“Mowing season is upon the city and the Mayor hopes the City can continue to maintain the property like they did last year,” Carlton continued.

Hickman resident David Thomas asked about a sink hole at the corner of Vance Street and Broadway, with Mayor Carlton responding the city will generate a work order and pass it along to AWR.