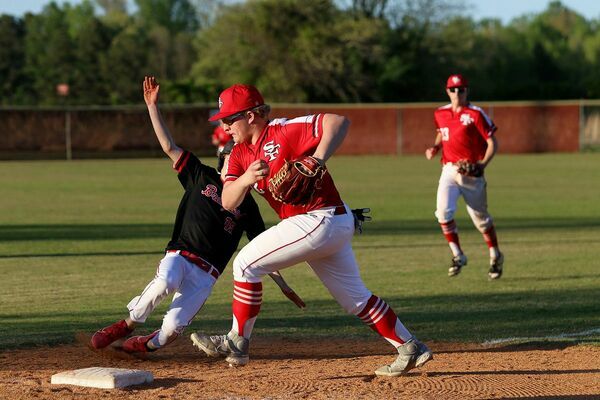 South Fulton Red Devil Garrett Slaughter goes for the tag in the home game, and win, versus Bradford April 19 at Wood-McFarland Field. (Photo by Jake Clapper) 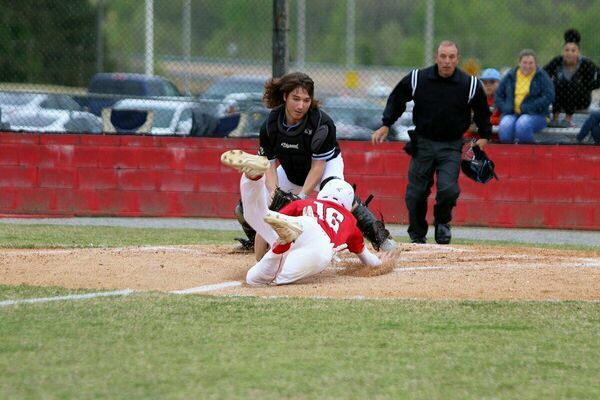 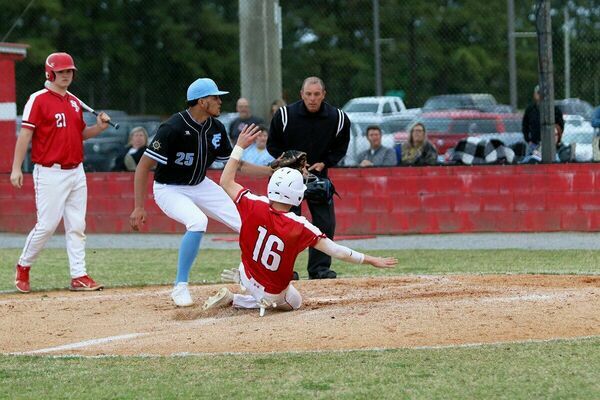 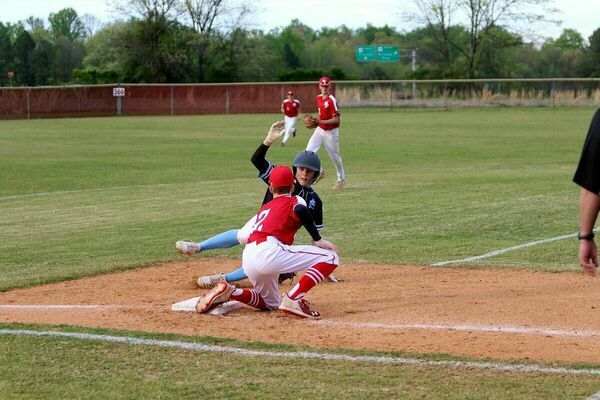 The Red Devils were defeated by the Dresden Lions April 13 with a final score of 10-4. The Red Devils scored their four runs on 11 hits with four RBIs.

Eli Carlisle was charged with the pitching loss for the Red Devils. Carlisle spent five innings on the mound, allowing nine hits and eight runs, only four of which were earned runs. Carlisle put two runners on with walks and had three strike outs. Cade Malray came in to finish the game, pitching the final inning. Malray allowed four hits and two earned runs whole recording one strike out.

The Red Devils traveled to Humboldt to take on the Vikings where they recorded another big win, finishing the game 18-1.

South Fulton Red Devils had a team batting average of .455 with 33 at bats and 15 hits. The Red Devils finished the game with 16 RBIs and 18 runs.

Eighth Grader, Brady McFarland, took control of the Vikings while being on the mound for the Red Devils and earned the pitching win. McFarland faced 16 batters and recorded eight strike outs. McFarland allowed one hit and one run during his four innings on the mound.

The Red Devils earned their 11th win April 16 as they hosted the Fulton County Pilots. The Red Devils jumped ahead early in the game and never let up.

Logan Cromika finished the game with a batting average of 1.000 with one at bat. Cromika recorded a RBI and one of the Red Devils team total six hits. Conner Allen and Drew Barclay batted a .500 with two at bats and one run.

Bryce McFarland took the pitching win while he pitched the entirety of the game only allowing one hit and recording 12 strike outs.

Chad Everett recorded the only hit for the Pilots on the evening.

Max Gibbs was the starting pitcher for the Pilots, and threw 44 pitches in two innings.

Dylan Hammond came in to relieve Gibbs in the third inning, and threw 44 pitches in two innings.

Jay Sipes took the mound in the fifth inning, and struck out the first two batters on 25 pitches.

Everett came in to record the final out and threw 26 pitches.

The Red Devils pulled out a win the top of the seventh inning against the Carlisle County Comets. Drew Barclay was in scoring position, when Beau Britt hit a sacrifice fly to left-center field to put the Red Devils on the scoreboard and to later on win the game as the Red Devils held the Comets in the bottom of the seventh.

The Red Devils recorded only two hits against the comets.

Barclay and Garrett Slaughter each had one hit a piece putting their batting average for the game at .333.

Brock Brown recorded the pitching win with two innings pitched and only allowing one hit. Brock walked one batter and struck one out.

Cade Malray spent three innings on the mound, striking out four of the nine batters he faced.

The Red Devils tacked on another district win April 19 against the Bradford Red Devils. The South Fulton Red Devils were the first on the score board scoring one run in the second inning. Bradford jumped ahead in the fourth inning scoring three runs.

The Red Devils went into the fifth inning chipping away at the two-run lead. The Red Devils scored one run in the fifth and another two runs in the sixth to gain the lead going into the seventh.

South Fulton held Bradford in the seventh to earn the win.

Three runs came across the plate while Brown was on the mound, but only one of the three was an earned run.