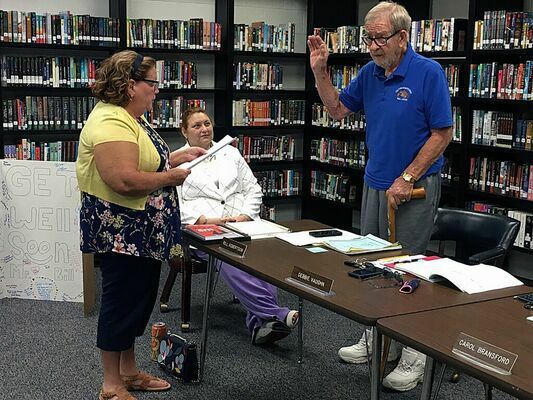 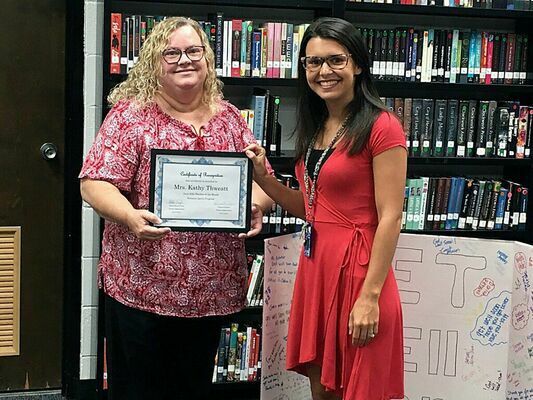 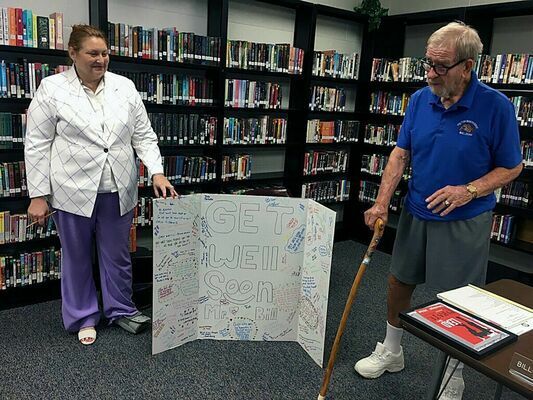 RETURNING FOR THE KIDS – Bill Robertson recently responded as to why he came back on the Fulton Independent School Board after serving for so many years and then retiring. Superintendent DeAnna Miller, left, holds a card given to Robertson, made and signed by the Fulton High School students when he was very ill, and given to him. “The kids…that’s why I am doing this again,” he said.
Previous Next

The Fulton Independent Board of Education met for their July 20 monthly session at Fulton High School, with former BOE member Bill Robertson returning to his previously held board seat, in addition to Board Chair Debbie Vaughn, Vice-Chair Carol Bransford, Rea Jones and Christy Pettigrew present.

Following the swearing in for Robertson’s new term, he explained why he chose to return to the School Board, after years of service, and then his recent retirement from the BOE.

He first displayed a huge, hand made “Get Well” card he had received during an extended illness, signed by students from Fulton High School.

Cayce Batts, the FIS district Social Worker, updated the board on the Summer Ignite program, with six total weeks of interaction with students and the final two-week session scheduled to start the following week.

“We had 80 kids who we served, from Pre-K to 12th grade. We had a large number of teachers who volunteered. Often there is such a lapse during the Summer months, so this was a way we were able to continue with school for the kids,” she said.

Batts commended the teachers who assisted with the sessions and presented Summer Ignite Teachers of the Month certificates to Kathy Thweatt and Jennifer Caldwell.

Kent Green reported on the FIS Extended School Services, ESS, this past school year having received a daytime waiver, to allow for one-on-one tutoring and assistance during the day instead of only before or after school sessions.

“There were 12 Middle Schoolers who brought their grades all to passing,” Green said, adding 20 students completed half or full credits for courses.

A review of the continuation lease notice with the Murray Head Start was presented by Superintendent Dr. DeAnna Miller, concerning the 1997 30-year lease with Murray Head Start, to provide services for preschool age children for the FIS district during 2021-2022.

A letter was provided to board members, sent to Dr. Miller from Cindy Graves, Director of Murray Head Start, to provide official notification that Murray Head Start will exercise their option to renew the 1997 30-year lease between the district, the Lessor, and Murray Board of Education, the Lessee for the purpose of conducting the Head Start program in the FIS district, for the 2021-2022 school year.

Dr. Miller directed the board’s attention to the notification from the Cabinet for Family Services, Department for Family Resources and Volunteer Services with the state of Kentucky, regarding the recent awarding of $150,000 in grant funding over two years for Early Childhood Education, to the Family Resource Youth Services Center, FRYSC, for FIS, The Family Connection, under the direction of Tracy Pulley.

Dr. Miller explained following a meeting with Pulley, Sarah Townsend and herself, it was decided the funds will be earmarked for establishing a “mommy and me” type group to meet each month for children ages birth to age 5. She told the board, the goal was to teach these parents how to intervene early regarding literacy, reading and math skills.

Dr. Miller also updated the board regarding the FIS District’s highest possible level of scoring from the Kentucky Department of Education, as to annual determination as required under the Individuals With Disabilities Education Act, IDEA. There are four levels of determination, Meets Requirements; Needs Assistance; Needs Intervention; or Needs Substantial Intervention. According to the notification, Fulton Independent School district scored status was Meets Requirements.

Little, a Fulton High School alum, was present for the meeting and introduced by Dr. Miller.

The Board took action regarding the acceptance of the 2021-2022 Certified Evaluation Plan, CEP, in compliance with Senate Bill 177, with modifications to address needs of the district regarding evaluating employees, with local school boards required to approve the plan and changes recommended.

The CEP was approved.

Athletic Director John Dillard addressed the Board through a request to approve funds for the implementation of a new ESports team for FIS, recognized by the Kentucky High School Athletic Association as an official athletic team. According to information presented by Dillard, startup cost would be approximately $3,000 including two season passes for 16 seats, t-shirts for team members and 2-3 gaming systems.

Both the coach, Sheri Langford and the assistant, according to Dillard’s proposal, were willing to volunteer their time for the team, which would include both boys and girls.

In May, the school board approved an extra duty salary schedule which included a $6,000 stipend for a high school Head Cheerleading Coach, and that position has not been filled, with a portion of that funding already encumbered possibly to be used for start up money for the ESports teams, Dillard’s proposal stated.

“We think this will be an opportunity for young people who don’t participate in traditional sports. The Kentucky High School Athletic Association has recognized it as an official sport. Kids will compete against other schools, and have accountability just like the other sports, as far as their behavior and grades, plus learn team work,” Dillard said.

Langford said teams will number three to five players, and all scrimmages and games will be closely monitored at school.

The Board approved the startup of the ESports team for Middle School and for High School.

Dr. Miller, as well as Director of Pupil Personnel Kent Green, presented to Board members the contracts to be sent to area schools for the release of SEEK funds for Average Daily Attendance on students attending schools other than Fulton Independent School District, but who reside within the FIS district.

Proposed for the 2022-23 school year from FIS district to Fulton County School District, was a specific number designation of 46, a number based on a nonresident list received from the 2020-21 contract, a number which is to decrease as those specific students leave the Fulton County School District through graduation or withdrawal until the number reaches 25, or one for one, whichever may occur.

The Board approved the submission of the proposed contracts as presented.

The second Reading of the Fulton Independent Board of Education Policies was approved.

The items were approved for surplus, and sale or disposal authorization, with board approval also confirmed for the Financial Report and the Orders of the Treasure