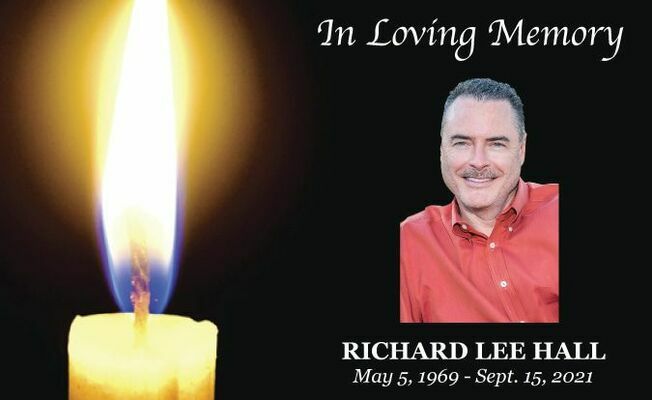 He was born on May 5, 1969 to Robert Carey Hall and Martha McCall Hall in Memphis, Tenn., and was raised in South Fulton.

He graduated from Southern Illinois University with a Bachelor of Science in Aviation Management. Hemarried DeLane Napier on Jan. 20, 1989 in Nashville, Tenn. In 2003, they chose to relocate and make Texas their home. In Texas he achieved his childhood dream of becoming a commercial pilot and was employed by Wing Aviation for many years. He was a dedicated and loving husband and father, an avid outdoorsman, and a member of The Current Church in Plano, Texas.

He was preceded in death by his father, Robert C. “Bobby” Hall.

A funeral service was held at 4 p.m. Sept. 19, 2021 at Turrentine-Jackson-Morrow Funeral Home Chapel, 2525 Central Expressway North, Allen, Texas 75013. The family received friends during a visitation Sept. 19 from 1 - 3 p.m. at the funeral home. The service was also live streamed at TJMfuneral.com on Richard’s obituary page by clicking on the following link: Celebrationoflife.tv. After the service, the recorded live stream will be available for viewing at the same link location.

In remembrance of Richard’s life, the family asks that any charitable donations be made to the National Right to Life Foundation (www.nrlcorg/donate/) or The Current (701 E. Plano Pkwy #103, Plano, TX 75074).

To convey condolences and to sign an online registry, visit www.tjmfuneral.com.