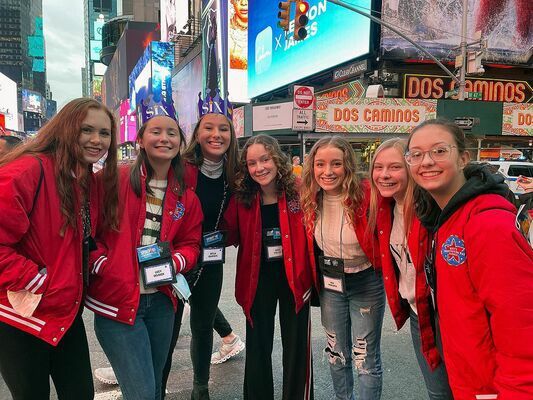 A view of Macy’s Thanksgiving Day Parade in New York City, for most, occurs from the comfort of sofas awaiting a turkey and dressing feast.

For some local young ladies, their view will be a bit more up close and personal this year, as they watch the crowds lining New York City’s streets, in anticipating of the giant balloons and elaborate, celebrity packed floats.

The girls, ages 13-18 are students of Erin Hancock, at Broadway Dance Company in Fulton, and this year they will dance in the parade.

Most of her students who will line up for the Macy’s parade route have been students at the school for 10 years or more. One participant, Bella Hancock, daughter of Erin and her husband, Sam, will join the group as an alumni,and is currently teaching dance class herself, in Florida.

The process to secure a coveted spot in the parade lineup was not an easy task, especially since the group was first preparing to participate in 2020, however because of the covid-19 pandemic, performers under the age of 18 were not allowed to participate.

Originally the age requirement was 14.

When Erin Hancock first attended the Macy’s Thanksgiving Day Parade as a tourist in 2010, she said she met some dance moms on the parade route who told her about their amazing experience being a part of the event.

“We knew that would be a future goal for Broadway Dance Company, but at the time our studio dancers were very young, so we had to wait for each of them to turn 14. The age limit has now been lowered to 13,” Hancock said.

She said the group first submitted their audition video to Spirit of America Productions, who handles the dancers and cheerleaders in the parade, and has had that responsibility for many years.

In addition to participating in what could be considered one of the most recognizable and popular parades in existence, a busy schedule of rehearsals awaits the group, with one rehearsal for television viewing on the green carpet in front of the Macy’s Department Store.

Students as young as two years old may enroll in Broadway Dance Company, in the “Broadway Babies” classes.

The facility coordinates and produces a Christmas and Spring recital each year.