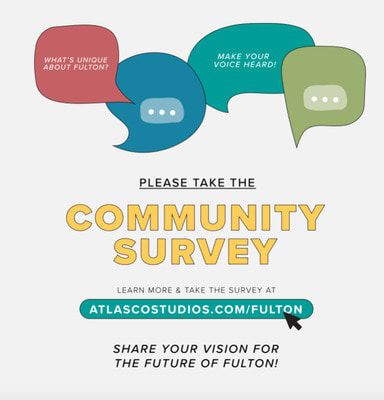 The City of Fulton is now seeking public input through an anonymous survey, which will allow those who live and work in Fulton to share personal perspectives about the current conditions affecting life in the region.

To participate in the survey, the link is :

The City of Fulton has partnered with Atlas Community Studios, a firm specializing in strategic planning and place-based economic development, to create a placemaking playbook related to Housing, Economic Development, and Marketing.

Members of the community play a critical role in guiding the development of a placemaking playbook with feedback and input.

When responding to this survey, we ask that you answer the questions honestly and thoughtfully to lay the framework for the playbook that is ultimately developed.

Your participation and input is a valuable resource for city leadership and your fellow residents. Your individual responses are anonymous and will be kept in confidence.

For more information about this questionnaire or project, please contact Mike Gunn at the City of Fulton or Alex Holland at Atlas Community Studios: