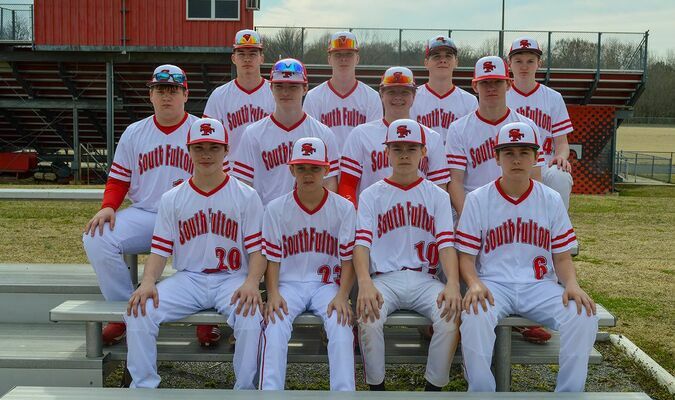 This year’s South Fulton High School Red Devils’ Baseball team lost eight seniors from last year, to graduation. Another player from the previous season, a Junior, made a transfer and still another, also a Junior is not playing due to disciplinary reasons.

All 9th, 10th, and 11th grade student athletes listed on the 2022 season roster are returning to the diamond for the Red Devils, along with some new faces in eighth grade.

In 2021, the Red Devils had a 23-13 season, finishing second in both the District and the Region.
They went on to win their substate berth, and earned the honor of a state tournament appearance.

Coach McFarland, who has headed up the Red Devils’ Baseball coaching staff for 14 years, including the two-game season in 2020, due to COVID, recognizes there could be some challenges for the team in the pitching department this year.

“All pitchers have no or very little varsity innings. Eight of our 12 players are 8th and 9th graders. We have no seniors, so we are looking at an extremely young ball team,” he said.
Top hitters, if history repeats itself from the previous season, could be Brady McFarland, who had 20 hits and Connor Allen, who accumulated 18 hits last season.
McFarland pitched in just two games last year, and he is the only returning player to see time on the mound.
Defensively, Alexander, Allen and McFarland will return to their previous positions on the field, with Alexander at outfield, Allen at centerfield and McFarland at shortstop.

“Everyone else is playing a new position or starting for the first time,” Coach McFarland said.

He sees Bradford as the probable frontrunner for the District as they return the most experience, with Dresden and Greenfield not too far behind.

“ If our pitching can throw strikes with timely hitting, I feel like we can compete and give ourselves a chance to win some games. We are going to have to play well,” he said.

With no seniors on board, leadership roles will be spread out among the oldest and most experienced players, Allen, Alexander, McFarland and Logan Cromika.

“Our district is new this year with Bradford, Dresden, Gleason, Greenfield, and us.. Our goal is always to compete and put ourselves in the best possible position going in to the district tournament. Anything can happen when you reach that point. We are going to have to stay healthy and continue to improve on a daily basis. The upside (if there is one) of having so many young guys and no seniors is our team should be with us for the next two years. We should improve game by game,” McFarland said.