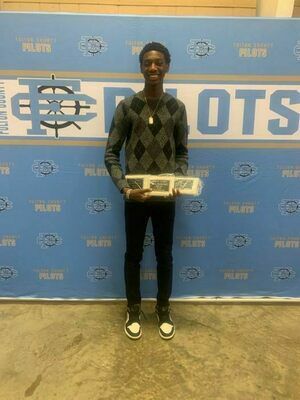 EARNS EIGHTH PLACE IN STATE TRACK AND FIELD -Omarion Pierce, finished Eighth in the High Jump while participating in the State Track and Field event held in Lexington on June 2. (Photo sumitted)

Out of 27 competitors, Omarion Pierce, a Junior, finished in 8th Place in the High Jump, after being ranked last going into the event. Pierce set a Personal Record with a Mark of 5-10, earning .5 points.

The High Jump was won by ninth grader Nate Goodin of Williamsburg with a Mark of 6-2.

Ja’Mesha Brown was entered in the Girls Shot Put, however she did not start.

Javona Davis, a Junior at Fulton County, participated in the Girls 100 Meter Dash.

The Girls 4x200 Meter Relay was won by a team from Bishop Brossart “A”, consisting of Kaitlyn Kramer, Hayley Hickman, Hannah Kramer, and Lexi Braun. They had a time of 1:49.12.

Fulton County’s team of Javona Davis, Ja’Mesha Brown, Jaleeha Smith and Anijiha Tucker earned 12th Place with a 1:54.68, out of a field of 24 competitors.

The Girls 4x100 Meter Relay came in 23rd Place, out of 24 competitors with a time of 56.74. The team consists of Ja’Mesha Brown, Javona Davis, Jaleeha Smith, and Anijiha Tucker.

Fulton County’s Omarion Pierce participated in the Boys 300 Meter Hurdles and earned 10th Place, out of a field of 24 competitors, with a Personal Record and a time of 44.50. Connor Dill, State Top 10, from University Heights, with a time of 39.89.