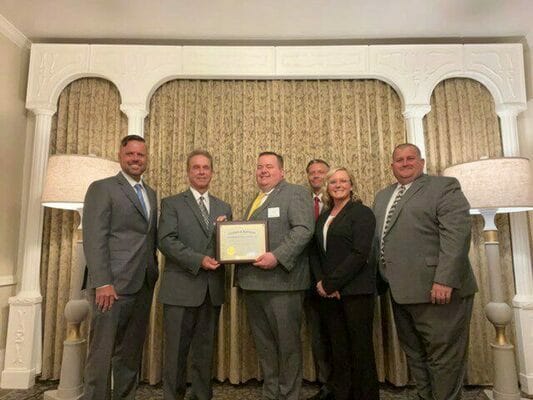 HORNBEAK FUNERAL HOME AMONG GOVERNOR'S HONOREES FOR SERVICE DURING TORNADO TRADGEDY -- During the recent 140th Annual State Convention of Funeral Directors Association of Kentucky, Gov. Andy Beshear issued a proclamation honoring funeral homes who served the families of the Dec. 10, 2021 tornados which devastated areas of Western Kentucky. In part, the proclamation stated "while providing compassionate care for the families who lost their loved ones, many of the funeral homes themselves were dealing with the loss of life and extensive damage...they stepped up to their calling and assisted communities in the clean-up effort after the storms, began rebuilding homes and businesses and cared for the dead..." Hornbeak Funeral Home of Fulton was presented a plaque for their active role in serving families throughout the community following the storms. On hand for the presentation, were, left to right, Garrett Hutchins, Kent Hutchins, Frank Giles representing the Western Kentucky Kentucky Funeral Directors Association, Chris Puckett, Valerie Cathey Bynum and Eddie Crittendon. (Photo submitted.)