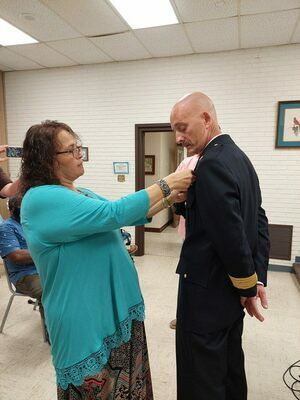 Gunn read a “Badge Pinning Ceremony and Symbolism” explaining the significance of the badge.

“I’m honored to be selected to lead the Fulton Fire Department. I’m humbled at becoming part of such a great city team. I could not ask for a better group of caring professionals and I look forward to working with them as we plan for the future, while continuing to provide excellent and responsive service to the city of Fulton and surrounding communities. I would also like to take another minute and say thank you to a few other individuals. Some are here tonight, and some are here in spirit. Almighty God, thanks for your grace and mercy in giving me another chance. The First Lady of Fulton Fire Department. You have been and continue to be my biggest cheerleader and continue to push me toward excellence. Thank you. To City Manager Gunn, thank you for believing in me. Kenney Etherton, so much to say. In short, you and I made our first fire together as chief. Coming from fire departments, stooped in history, making your first fire with your crew creates a bond like no other. To that I say, I’m proud to call you brother. Allen Poole, thank you for allowing me to ride in the front seat of your car. That is unusual for me. I welcome change. Thank you for reminding me daily, it will be alright. You truly are a public servant. Lastly, I want to say thank you to those who made the ultimate sacrifice for our profession. I will never forget my brothers and sisters who I have lost. Thank you,” Martin said.

“One of my concerns is the 18-wheeler that came through East Fulton about two and a half months ago and put ruts in yards on Vine Street, Maple Street, Page Street, and Wells Street. He was totally lost. Is their insurance doing anything?” Hardin asked.

“There was an accident report done on this. Public Works was addressing this, not sure where it stands,” Allen Poole, Fulton Police Department said.

City Manager Gunn said, “Let me do some questioning and answering and I will get back with you.”

Hardin also asked, “What about Richard Pickle’s property next to the church. It is a burned out shell and something needs to be done about it?”

“It is in the process to be taken care of,” Gunn said.

“Who is in charge of the reconstruction money for the City of Fulton. How do you determine where it goes and what area? This is the money from the Joe Biden Administration,” Hardin said.

“We received both of our trounces, a technical term used. We have done nothing with the two payments we received. We have three years to make a decision,” Gunn said.

Annie Ingram, Fulton resident, asked, “My concern is my daughter lives on Martin Luther King Jr. Dr., near the railroad. Someone needs to mow the side because there are snakes there. I have grandchildren that live there and I’m worried about them. I have talked with the railroad for two years and still need it mowed.”

City Manager Gunn said, “I thought it was sprayed. I will check on it.”

Deidra Newbern, Fulton resident, said, “I have talked to several people about the corner of Walnut and Martin Luther King Jr. Dr. There is a bunch of junk out there. I have talked to a bunch of people and no one seems to be able to do anything about it. It probably hasn’t been mowed in a month now.”

“As I explained to you the other day, it has been turned over to the attorney. I talked to her this afternoon. Motions are ready to be filed. The problem is a court order gave the property to a tax company. The tax company didn’t take it and the problem is who do we serve. The individual seems to think he still owns it. Allison (Whitledge) is planning to file motions with Judge Langford’s court to reopen the case to have it reconsidered so we can do something with it,” Gunn said.

An update on the DOT Pipeline Safety Grant Submittal.

“You authorized the Mayor to sign the grant and we thought we had a hard date of July 21 of turning the grant in. there is apparently so much trouble with the website they have extended the deadline to Aug. 8, giving us a few more days to work on. We have it down to about $13 million in cost, including everything from a master meter to changing out some meters, changing out gas supply lines that are metal, cast iron, or old PVC. Bubba and them did a real good job of identifying what we have. We now have photographic proof of what we have or suspect we have. Melinda Winchester and Bobby Deitz, with Bacon Farmer Workman, have worked a lot of hours on getting it together. We have phased down to three phases. We are trying to hold each phase down to $4.5 million each. The strategy is if you do the math on the grant, there are 60 possible awards, about $3.4 million per award,” Gunn said.

Sharye Hendrix, South Fulton Parks Board, came to inform the Commission of a special reception for National Senior Citizens Day to be held locally on Aug. 20, at Pontotoc from 11 a.m. – 1 p.m. for anyone ages 55 and older.

“Last year 55 attended our event held in the Harvey Vick Room in South Fulton and loved the food Jeff Vaughn brought in. This year the Parks Board will provide a light lunch, dessert, door prizes and fellowship with one another. The theme is “Proud of Red, White, and Blue and Senior Life Too. I invite you to stop by and enjoy the day,” Hendrix said.

The first reading of City Ordinance 2022-01 Closing a certain section of Third Street between Bankers Place and Fourth Street was heard by the Commission.

Discussion on Fulton Tourism operating the Farmer’s Market was heard.

“One of the directions when we started presenting things for tourism we were real big on having tangible items. With the Farmer’s Market, I don’t need to be running it from the City Manager’s office and I don’t have the staff either. I would like to see, while working on tourism, transition the Farmer’s Market to Tourism as a facility for them to run. The Village Project again. We will get it done and get the infrastructure there and then turn over to Tourism to run. We have a business model and plan and think they can pick up and run with it,” Gunn said.

Municipal Order 2022-13, authorized the City Manager to advertise and accept applications for a seasonal general worker for Public Works Department.

“There are three types of employees. We have full time; part time, which can have no more than 100 hours per month; and seasonal, who can work all hours, but only nine months. The intent is to take this person and bring back the inmate crews and put them on mowing parks. It makes no sense to have water technicians doing mowing and that type of work,” Gunn said.

Municipal Order 2022-14, authorized the City Manager to advertise and accept applications for a full-time general worker in the Public Works Department.

“We have another retiree coming Oct. 31, which is Danny Pettigrew. I need to start the search to get someone to replace and get trained,” Gunn said.

Municipal Order 2022-15, approved the job description for an administrative assistant to the City Manager.

“This position is where we are redirecting the CFO (Chief Financial Officer) position and we are going to put three areas of performance to help the City Manager with projects, be the liaison between the accounting firm and city staff and payroll clerk duties,” Gunn said.

City Manager’s Report, “At our next meeting on Aug. 8, we will have an awards presentation for all those individuals retiring,” Gunn said.

“I saw the retirements coming 10 years ago when I was City Manager. You have over 150 years of experience and you can replace with the best person, but until you have been in the trenches you don’t have that much experience. They will be replaced, but they won’t be replaced. They will be missed and I hope they will continue to answer their phone during the transition. I wish you happiness in your retirement,” Commissioner Stokes said.

“Bad news is we received notification from our online debt collectors. We were paying 35% of what they were collecting. They just notified us they were going up 9%, so I’m going to do some research and see if I can find something better,” Gunn said.

“Second thing, Lift Station 8. The blue structure in front of Carr Elementary. Probably the most important piece of infrastructure we have in the city. If it goes down, in four hours we will have sewage backed up in homes. We have been fighting the battle for a while. There are two electric motors, one is the primary, and the other is a backup. On motor went down, we took it out, sent to be repaired, returned it and then it went out again. It will take four to six week to get it back. If you see the yellow light on top come on, call City Hall. I have been jumping through hoops to get to the point I can use the money given to us earlier. The problem is it will take about six and half months to get the new motor in. Technically, we are still under an emergency declaration. We never descended it. I need to find out if we can bypass some of the red tape. We truly are in an emergency state,” Gunn said.

“Good news is the Farmers Market gave out 300 bags at the Free Produce Day. In 90 minutes, 190 watermelons were given away, and in 45 minutes all the vegetables were gone,” Gunn continued.

“Housing is a big issue in the city. There are jobs, but where for people to live. We need to create housing,” Gunn said.

Fulton Independent Board of Education to meet J...