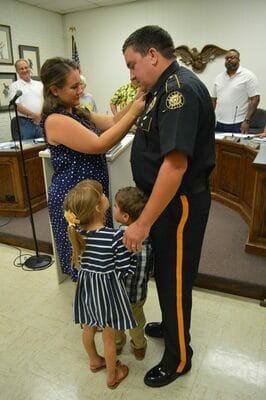 MAKING IT OFFICIAL – Recently hired Fulton Police Department Chief Allen Poole was officially sworn in to the leadership position following over two decades of service with the FPD. The oath was given by Fulton Mayor David Prater Monday night with Chief Poole’s wife, Laura and children, Lilly and Jack participating in the pinning ceremony. (Photo by Benita Fuzzell) 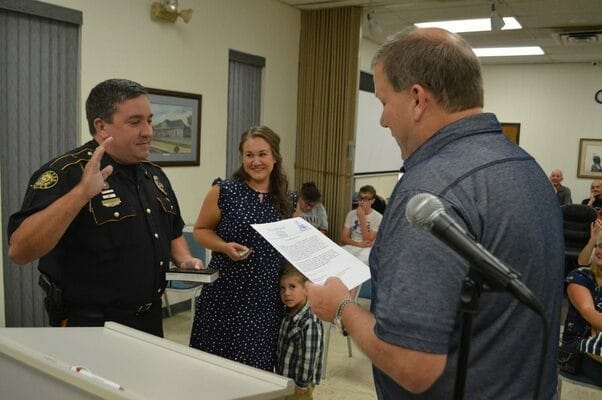 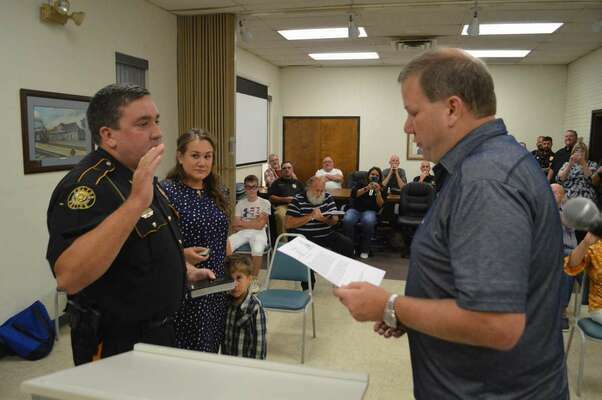 Fulton’s City Commission approved by Municipal Order 2022-25 Monday evening, to declare two properties at 409 and 411 Fourth St. as surplus, and authorized the City Manager to accept sealed bids on both properties.

Following the approval from Mayor David Prater and Commissioners Elaine Forrester, Darcy Linn, Jeff Vaughn and Cubb Stokes, City Manager Mike Gunn explained, in an effort to promote residential growth within the city, the bid review process will give preference in consideration to individuals who submit a bid with a proposal to construct a one- or two-family residential structure on the property.

Gunn shared with the officials, that many of the lots now owned by the city would not accommodate the construction of a family dwelling, however these two lots would be within the size required for the construction.

In new business listed, Mayor Prater was authorized by the commission to execute a one year temporary lease agreement with Verizon Wireless for the use of property located around 350 Browder St., for a temporary cellular tower site effective Aug. 26, 2022.

Gunn explained the tower would not be permanent at the location, as a permanent tower would be constructed while the lease, at $3000 per year to be paid to the city, is in force.

The 2022 City Bike Walk Plan, developed for the city by the Purchase District Health Department, was approved, with Gunn to research funding options available.

A number of housekeeping entries on the agenda were approved, including the Resolution 22-10 adopting the 2023-2027 Fulton County Solid Waste Plan and Area of Designation; Municipal Order 2022-32 to authorize the Mayor to sign the Fiscal Year 2023 Agreement for Operation of the Stream Gauge Station at the Bayou De Chien Creek, with the United States Department of the Interior; and the City Manager’s authorization to sign a Memorandum of Understanding with the Fulton Rotary Club.

Gunn reported the Solid Waste Plan is customarily executed by the city, and pertains to projects such as the collection of used tires for disposal.

The Stream Gauge Station at Bayou De Chien Agreement for Operation requires a $9,000 annual fee from the city, and the Department of the Interior provides $3900 annually for the agreement. The station provides alerts to the city’s wastewater lagoon in the event the stream is too high.

Municipal Order 2022-31 was approved, to authorize execution by the Mayor for an Interlocal Agreement for Automatic Assistance for Fire Response between Union City, Tenn. and the City of Fulton.

Fire Chief Jeremy Martin, present for the meeting, said the Department currently has agreements with other Departments including South Fulton, Water Valley, Hickman and Fulton County Rescue. He explained although many rural Departments are experiencing shortages with staff, all departments are willing to provide assistance when possible, for apparatus and personnel.

Gunn recommended the City take the Comp rate for 2022, with no action taken.

The City Manager was authorized through Municipal Order to hire Stormy Travis as a pat time Administrative Assistant at the Fulton Police Department, effective Aug. 23. Gunn reported she will perform administrative duties for the department, working approximately 23 hours per week.

Discussion took place regarding recent concerns and complaints received about the condition of the city’s cemeteries and ditches along the southern end of Wells Avenue.

Gunn said the city had received complaints in regard to the upkeep of the cemeteries. He reported currently the Public Works Department mows approximately 200 acres during mowing season, and the use of inmate labor for mowing is more complicated administratively than it was previously.

“We now have to have staff members certified to oversee the inmate labor, and there are restrictions as to where the inmates may be allowed to work. We are now having to use water, sewer and gas technicians to mow the cemeteries. When we went out for bids, before, for mowing the cemeteries, it was going to cost about $8000 per month, just for the cemeteries. We just do not have the manpower right now,” Gunn said.

He reported the cemeteries have now been mowed.

“It could almost be a full time job, just to mow the cemeteries,” he said.

He reported there is no revenue stream for cemetery maintenance. Although there is a trust designated for cemetery care, currently with an approximate balance of $73,000, that balance could be depleted in a short amount of time, with the cost estimates of mowing by a contracted party.

As to the ditches at the south end of Wells Avenue, Gunn said the ditches are the responsibility of the property owner.

Commissioner Stokes noted that his property contains a ditch, and he maintains that portion of his property, as do other residents. However, Stokes added that in the event the city’s ditches should become filled with debris, the city could assist in cleaning them out.

Both Gunn and Whitledge said they will avoid cut-off of service for the tenants residing on the commercial property.