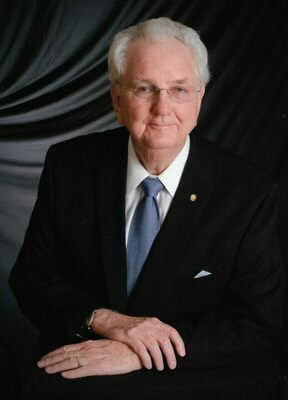 Mr. James O. Butts, age 88, of Fulton, Ky passed away on Tuesday, September 13, 2022 at The Jackson Purchase Medical Center in Mayfield. James was born in St. Louis, Missouri on January 1, 1934 to the late Talmadge D. Butts and Emma Browne Butts. At a young age the family moved to this area, and he attended school at Chestnut Glade and then Fulton City Schools.

James was a faithful member of Smith Street Church of Christ where he had served as deacon, elder and bible class teacher. His love of God was shown as he opened his bible classes with the reciting of the 23 Psalm. He loved mission work and went on numerous missionary campaigns. James served on the Board of Trustees at Freed Hardeman University for 50 years.
He faithfully served his country in the U.S. Air Force during the Korean Conflict. After his time in the service, he met and married Patsy Jean Killibrew on May 20, 1956. James promised Patsy they would travel, and he kept that promise. They have been to every state in the Union and numerous foreign countries. He instilled his wanderlust in his two daughters, Kathy and Jamie as they traveled throughout their childhood and adult years.

James began work for Mr. Harvey Caldwell at Office Outfitters, Inc. in January 1956. James and Patsy bought the business in 1965. When James was asked about himself, he would most often reply, “I’m just a paperclip salesman from Chestnut Glade.” James sold paperclips all over West Tn and West Ky for 25 years and was appointed Assistant Treasurer for the Commonwealth of Ky and later Assistant Secretary of State, serving both offices under the late Francis Jones Mills.
Following his service in State Government he returned to Fulton and began a career with the former Fulton Bank. He served on the Board of Directors and was President, retiring in 2001.

James valued faith, family, and education. Always looking for opportunities to serve his community, James served on numerous boards and community organizations on both local and state levels. James had a true passion for Education, advocating tirelessly for Student Athletes. Football was his favorite sport, and he was blessed to have developed a special friendship with Houston Nutt. As Houston’s coaching career advanced James was blessed to be on the sidelines at the University of Arkansas, and The University of Mississippi.
James Butts, affectionately known to his family as Daddy and Granddaddy, instilled in each member of his family how to live life with integrity. Serving and valuing everyone was a paramount lesson he passed on to his children and grandchildren. He was their true North Star.
James is survived by his wife of 66 years, Patsy Killibrew Butts, two daughters, Katherine Butts Waycaster (David) and Jamie Butts Hicks (Mike); four Grandsons, Michael Waycaster (Lauren), Blake Waycaster, Adam Hicks (Samantha) and Conner Hicks; six great-grandchildren, Ezekiel Waycaster, Olivia Waycaster, Berkeley Hicks, Dawson Hicks, Sloane Hicks and Raden Woodruff. He also is survived by several nieces and nephews.

He is preceded in death by his parents and two sisters, Virginia Austin and Vivian Wolberton., one nephew, David Austin and one niece, Susan Wheeler.

Services will be Monday September 19 at the Hornbeak Funeral Chapel at 1:00 pm. Visitation will be from 11:00 until the time of the service. Burial will be at Pleasant View Memorial Gardens.