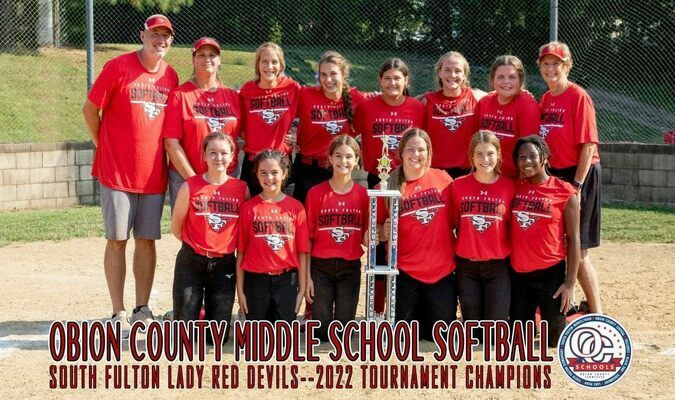 Audriana Mullcahy was on the mound for the Lady Devils, striking out eight, and allowing only two hits.

In the battle against Ridgemont, Mulcahy shared the mound with Emma Williams, with Mulcahy pitching two innings and Williams, one. Mulcahy struck out four and allowed two hits.

The Lady Devils began the first inning with five runs, then poured it on for 19 runs in the second inning, holding the Lady Mustangs to just three runs total in the first.

Crossing the plate for runs were McFarland, Lusk, Bellamy and Stevens with two, Long, Mulcahy, Redden, Faulkner, Copper with three and Williams with one.

With six innings played and the Lady Generals held to one run in the sixth, the Lady Devils scored once in the first and third inning, with a powerful fifth inning five run tally, for the win, 7-1.

Mulcahy and Stevens made contact at bat, with runs scored by McFarland, and Stevens, two each, and Mulcahy, Copper and Martin, one run each.

Audriana Mulcahy struck out 10, and allowed no hits or runs.

Martin Middle’s Stocton pitched two innings, allowed seven hits and 11 runs, and struck out four. Hayden pitched one inning and Wilson, less than half an inning.

HIts were banked by Mulcahy, Redden, each with two, and one hit from McFarland, Long, Faulkner, Stevens and Bellamy. Long had four RBIs, Mulcahy had three, Redden, two, and Stevens and McFarland, one.

Against Ridgemont, South Fulton scored five runs in the first inning, two in the second, three in the third and four in the fourth, holding the Lady Mustangs to their only four runs of the game, coming in the second inning.

Mulcahy was the winning pitcher with four hits and four strike-outs.

Mulcahy also had three hits and two runs for the Lady Devils, plus four RBIs.

Long, Lusk and Copper had a hit each in the game, with runs scored by McFarland, one, Long, three, Redden, one, Faulkner, one, Lusk, two, Copper, one and Martin, three. Copper had two RBIs and Long, Redden, Lusk and Stevens each had one RBI.

The outcome last week was different when the Lady Devils competed against Martin Middle, held to three runs in the third inning, out of four innings played.

Faulkner was on the mound for the Lady Devils, striking out two and giving up six hits.

McFarland, Long and Mulcahy scored the runs for South Fulton. Mulcahy, Faulkner and Copper had the hits against Martin. Faulkner also had two RBIs.

Against Union City, Audriana Mulcahy was on the mound, allowing one hit, three earned runs and striking out 10.

For South Fulton, Alli McFarland, Gabi Long and Avery Faulkner had two hits a piece, with Audrey Redden, Serenity Copper and Abby Bellamy each recording a hit in the game.

The Lady Devils scored one run in the first, one in the second, two more in the third and four runs in the fourth, for their 8-6 win.

The Lady Tornados failed to score in the second and fourth innings, bringing in two runs in the first, three in the third and one in the fifth.

In the game versus Hillcrest, Sept. 13, South Fulton’s Mulcahy and HIllcrest’s J. Poore were on the mound.

Mulcahy fanned six, gave up seven hits and had five earned runs. Poore struck out 13 at the plate, and gave up three hits.

Lady Devils McFarland and Redden had one and two hits, respectively, with McFarland scoring two runs and Mulcahy crossing the plate once, in the 6-3 win for the Lady Cougars.

South Fulton’s loss at the hands of the Dresden Lady Lions Sept. 12, was shared by pitchers Avery Faulkner and Audriana Mulcahy, with two innings pitched by each.

Faulkner struck out one, gave up two hits, while Mulcahy struck out three and gave up one hit, in the 14-5 loss by the Lady Devils at the hands of Dresden.

Gabi Long and Serenity Copper each had a hit and a run, as did Audrey Redden. Mulcahy had two hits and a run, and Carlisle Lusk, two hits for the Lady Devils.