DISCOVERY PARK OF AMERICA TO CELEBRATE 10 YEARS IN 2023 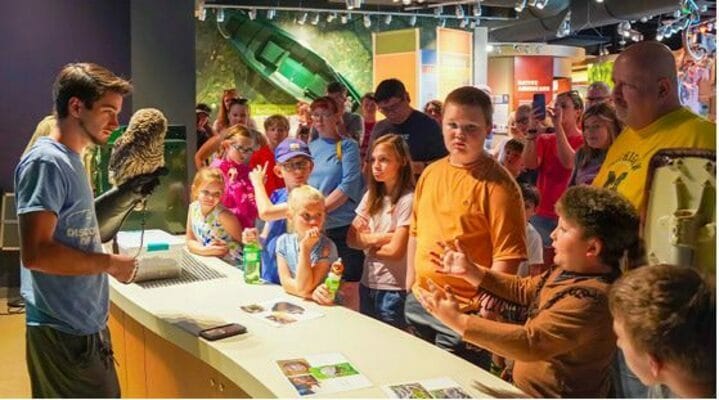 Celebrate 10 Years of Discovery with Us in 2023

2023 marks 10 years since Robert and Jenny Kirkland cut the red ribbon and opened the doors for the very first time on November 1, 2013, and we are excited to share with you the plans to celebrate Discovery Park of America all year round beginning on January 2, 2023.

New hours in 2023 will also provide more opportunities for guests to visit. Beginning Jan. 2, 2023, we will be open Tuesday through Sunday and closed on Mondays through February. From March through August, we will be open seven days a week.

As many of you know, Discovery Park was an idea first introduced and then funded for $100 million by the late Robert Kirkland, a Union City businessman and philanthropist, and his wife, the late Jenny Kirkland. The mission that day, as it still is today, was to inspire children and adults to “see beyond” and leave inspired to learn more about the world around them. In the decade since, more than 2.5 million guests have visited and experienced the 100,000-square-foot museum and 50-acre heritage park.

While inspiring millions, we have also made a large economic impact in Obion County during the last ten years. Since we opened, local tourism has increased significantly, contributing to the increase in sales tax collected in Union City. For 2012, the last full year before Discovery Park opened, the local tax collected by Union City was $7.1 million. For the eight full years after Discovery Park opened, the average local tax collected annually was $8.3 million — an average annual increase of $1.2 million.

Tennessee Department of Tourist Development recently shared that tourism spending in 2021 in Obion County was $66.9 million, up 28% over 2020. With the increase in tourism revenue, sales tax collected since 2012 continues to trend upward, with the City of Union City collecting a record of $9.8 million in local sales tax in 2021.

The presence of Discovery Park was also a contributing factor in the decision to move forward with the Union City loop of I-69, which is now scheduled to open by fall 2023. The Intermodal Surface Transportation Efficiency Act of 1991 included two high-priority corridors that later became sections of I-69. Corridor 18 from Indianapolis, Indiana, to Memphis, Tennessee, via Evansville, Indiana, runs behind the park with an exit ramp located on each side.

In 2023, there will be many opportunities for our guests and members to celebrate Discovery Park’s 10th birthday.

Discovery Park’s new greenhouses and the Farm Credit Mid-America Education Pavilion will open in 2023 along with a new permanent exhibit coming in the summer, “Duck, Duck, Goose: Waterfowl of the Mississippi Flyway,” that is being created in partnership with Ducks Unlimited. It will use three-dimensional objects, interactive elements and hands-on experiences to tell the story of waterfowl hunting, conservation and the ecosystem of the Mississippi Flyway.

History lovers and those local to the area will also appreciate the 2023 temporary exhibits which include “Inside the Cornerstone Box,” a display of items the Discovery Park exhibits team discovered inside a cornerstone box that was found in the rubble of Dresden First United Methodist Church of Dresden, Tennessee, after a devastating tornado; updates to the Southern Artist Showcase and the Northwest Tennessee Photography Club Showcase; and a photography exhibit featuring photographs taken by Seth Dortch during waterfowl hunts along the Mississippi Flyway and in the Reelfoot Lake region.

Our guests visiting in 2023 will also discover updates to two of the museums most popular experiences — Discovery Theater and the Water Tables in the Simmons Bank Children’s Exploration Gallery. The Discovery Theater is being upgraded to incorporate a state-of-the-art, laser-illuminated 4K Digital 3D projection system. Also included in the upgrade is the latest high-efficiency 40,000-lumen laser projector on the market, an advanced surround-sound system and the ability to show 3-D films, which will provide significant new programming capabilities in the theater.

The designers of the new Water Tables have opted for a larger experience that incorporates many new interactive activities and snakes throughout the entire gallery that our youngest guests will especially appreciate. New elements added include a fishing pond, interactive rain clouds, moveable aqueducts, many new water toys and an activity that encourages children to direct fog using a series of pipes.

While many of our popular annual events return in 2023, this will be the first year for a three-day Native American Educational Pow Wow to be held Oct. 27-29, 2023. The goal of the event, unique in Northwest Tennessee, is to provide a place for Indigenous people from tribes around the country to celebrate their culture while educating our visitors on this aspect of our nation’s past, present and future.

From January through February 2023, we will be open Tuesday through Sunday and closed on Mondays. From March through August, we will be open seven days a week. Days and hours of operation along with more information to plan a visit can be found at DiscoveryParkofAmerica.com/visit.