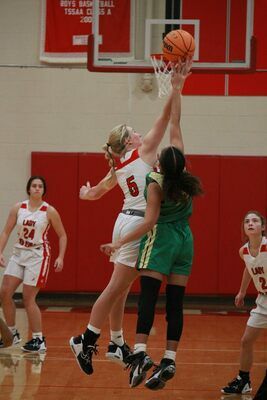 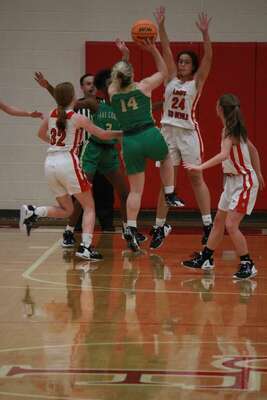 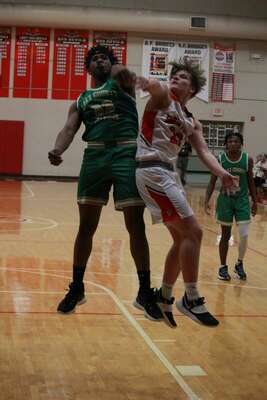 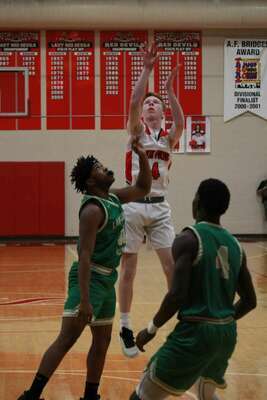 South Fulton’s Red Devils came up two points shy of a win against visiting Lake County Falcons in the home court opener for the Devils Nov. 22, 52-50, in favor of Lake County.

Red Devil Brady McFarland accumulated 16 points on the night, six out of 10 at the line and connected on five two-pointers.

Charles Michael Mulcahy had 12 points for South Fulton, a perfect four for four at the line, along with four two-point goals and Conner Allen connected on two three-pointers as well as two two-point buckets for his 11 points in the game, succeeding on one of two trips to the line.

The Falcons jumped off to a 16-10 lead at the first quarter buzzer, and scored another 16 points by the end of the first half, putting them ahead 32-16. South Fulton outscored Lake County in the second half, 13-10 in the third and 14-10 in the fourth, but could not overcome the first half deficit, in the narrow 52-50 win for the visiting Falcons.

Lake County’s Jeremy Ceaser had 20 points and Malachi Clay, 14 for the Falcons.

The night before, on Nov. 21, South Fulton had control in the first quarter against Bruceton, 21-14, then saw their hosts’ momentum shift in the second round of play, with Bruceton tallying 18 more points and the Red Devils 14, finishing the first half with a 35-32 advantage by South Fulton.

The game teetered back and forth in the second half, with Bruceton banking 15 points and South Fulton, 18, but it was Bruceton who matched the 18 point mark in the fourth.

South Fulton answered with 13 fourth quarter points, for a narrow, but final lead and win for the Devils, 66-65.

Red Devil Brady McFarland earned team high recognition for his 30 points in the game, with two three-pointers, 11 two-point goals and two of three connections at the line.

Charles Michael Mulcahy put in 5 points toward the win, with Dylan Ruddle and Conner O’Neal each recording 3 points.

Bruceton’s Preston Hollingsworth had 30 points, Thatcher Crews and Tab Crews had 16 and 13 points, respectively, for the host team.

In the Bruceton matchup, Anna Gore had a team high 18 points, coming by way of seven two-point baskets, a success from three-point range and connecting on one of two trips to the line.

Lady Devil Maddie Gray was a perfect three for three at the line, hit a three and found net on two two-point buckets, with Aubree Gore shooting 10 points for South Fulton, from three two’s and four points from her six trips to the line.

South Fulton’s Katie Barclay had 6 points, with Jadyn Rushin and Abbi McFarland having two points toward the win.

Bruceton’s Brooklyn Ivey had 6 and Makala Bass, 4 for Bruceton.

South Fulton over-powered Bruceton, holding the hosts to just 2 points in the first quarter, to the Lady Devils’ 15. Before the half ended, the Lady Devils broadened their lead to 28-6, and then came back in the third with more of the same, outscoring Bruceton 16-7, and then sealing the deal with a fourth quarter 8-point tally, and a win, 52-24.

In the Lady Devils’ home 69-52 win against Lake County’s Lady Falcons Nov. 22, Maddie Gray had team-high honors, with 28 points, courtesy of 10 two-point goals, a three-point success and 5 points at the line.

Aubree Gore had 13 points for South Fulton, banking a three point basket as well as four two’s, and sister, Anna Gore had 10, from five two-point goals.

Katie Barclay had 11 points in the win, and Abbi McFarland, 7.

In the first quarter, South Fulton took the lead, 18-13, but the following quarter, it was a switch-around with Lake County scoring 18 and South Fulton, 13, ending the half with a 33-33 tie.

The third quarter proved to be the deciding factor, with the Lady Falcons held to only 7 points by the Lady Devils, who managed to outnumber the visitors with 10 points, and then a strong fourth quarter effort by South Fulton’s 28 point surge was too much for the visitors, who managed only 14 points in the final quarter of play.

Lake County’s Takyla Hill had 20 points for the Lady Falcons.