Members of Fulton’s Parks Board spent most the June 2 regular session at the Pontotoc Community Center, in review of the Cost Evaluation for Fulton’s Lions Club Park, the main park where Summer League softball and baseball games are played, the secondary Lions Club Park in the vicinity of Lohaus Field, and downtown Fulton’s Pontotoc Park.

Board members Kenney Etherton, Chair, Teresa Johnson, Ashley Grissom, Kim Jobe and Anna McCoy heard from City Manager Mike Gunn as to the monetary figures provided by Luckett & Farley, for a number of park upgrades proposed for development by the board.

Gunn explained the price tag for the major parks’ overhaul could be broken down over the course of several years, and options could be available from time to time to carve out money from the city’s budget, through the utilization of grant availability, and also returning to the Fulton Tourism Commission for assistance as a funding source.

Both Gunn and Etherton agreed ofter it seemed following a major catastrophic event, such as the recent Covid-19 outbreak, grant funds seem to be more plentiful, however matching funds usually are required.

Gunn reported the basketball courts and tennis courts within the city’s parks system are still considered closed, and according to Kentucky Gov. Andy Beshear’s recommendations, social distancing as well as a limit of a gathering of 10 people or less is still in place, with possible revisions coming into place at the end of June.

Board member Anna McCoy updated the board on the previously scheduled “Longest Day of Play” event, scheduled for June by the board, and set to take place at Fulton’s main Lions Club Park. She said because of restrictions, that event had been cancelled. However, she said the University of Kentucky Extension Agency had arranged for the distribution of “Day Camp In A Bag”, for area children to use this Summer for activities at home.

Board members Jayden Padilla and Sam Dluzniewski were absent from the meeting. 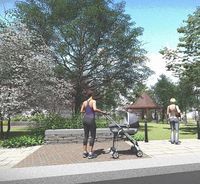