The host Bulldogs wasted no time on their first possession of the night, as Bulldog Ethan Lannom found the end zone on a 70 yard touchdown run. The two point conversion was good, with FIS up, 8-0.

South Fulton quickly answered with a 30 yard run by Red Devil Trevor Stunson, and Stunson’s extra run in for two tied up the score at 8-8.

South Fulton held the Bulldogs for the second and third quarters of play, with Red Devil Mason Parrish running in from 25 yards for the touchdown, but the two point conversion was no good.

In the third quarter, Red Devil Trevor Stunson ran in on a 24-yard run, and added in the extra two for South Futon, securing a 28-8 lead.

In the fourth and final round of action, South Fulton’s Jocquan Eaton ran the ball in from 6 yards out, for a TD, but Bulldog Ethan Lannom was not finished for FIS, scoring on a 50 yard run for his team.

Bulldog Coach Harold Hutcherson said his entire defense had made great improvements that did not project onto the scoreboard.

“These boys are starting to get it. They are getting tougher and tougher and we have a bright future if we all stick with it,” Coach Hutcherson said.

For the Red Devils, Joyner had 55 yards in passing, connecting on 5 of 7 attempts. Carson Choate had two receptions or 36 yards, Jakob Cooley, one for three yards, Jamison Barclay, one for one and Mason Parrish, one reception for 15 yards’ gain.

Mason Parrish had 17 yards of rushing in 12 possessions and Grant Joyner, 8 yards in 4 carries.

Joyner connected on three of five passes for 14 yards.

Lejend Everett had 17 yards for his two receptions.

Red Devil defenders Austin Bradley, Trevor Stunson and Jesse Davis each had three tackles to their credit for the game. 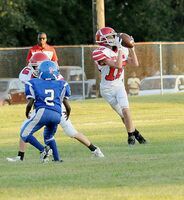 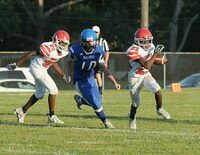 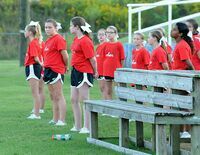 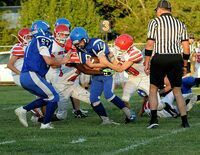