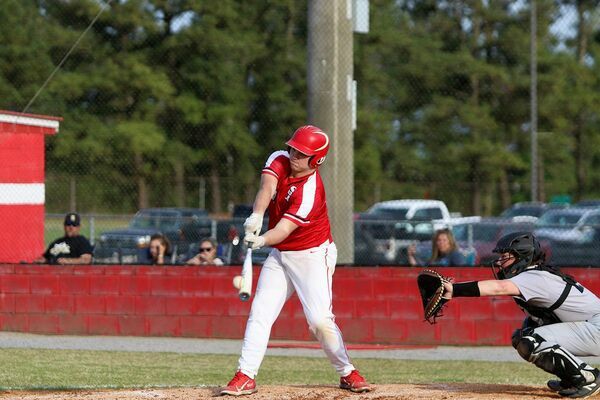 South Fulton's Eli Carlisle takes his turn at the plate during Monday night's baseball game with visiting Dresden Lions. The Red Devils scored five runs, but were two short of a district win, losing to the Lions, 7-5. (Photo by Jake Clapper)

The South Fulton Red Devils tacked another win to their record as they traveled to Ballard County. The Red Devils came out victorious of the 10-2 final score.

The Red Devils scored their 10 runs on 18 hits and four errors. Eli Carlisle, Garrett Slaughter, and Logan Cromeika finished the ballgame perfectly from the batter’s box, batting 1.000. Carlisle had three hits with one RBI from his three at-bats. Slaughter had three RBIs along with four hits. Cromeika had one hit.

Bryce McFarland pitched six innings allowing six hits and two walks. Two runs came across the plate while McFarland was on the mound, one of which was earned. McFarland recorded six strikeouts.

The Red Devils took on the Humboldt Vikings for the first contest of the Caleb Turner Classic, where the Red Devils finished on top with a 13-1 final score.

The Red Devils finished the contest with six hits and 12 RBIs for their 13 runs. Brock Brown, Drew Barclay, and Dylan Ruddle each finished with a batting average of 1.000. Brown and Barclay each had two hits for two at-bats, and Ruddle had one at-bat with one hit. Beau Britt finished the game, batting .500. Britt had one hit for his two at-bats.
Cade Malray pitched two innings to start the Red Devils off. Malray allowed no hits and no runs during his time on the mound and struck out five of the six batters he faced.

The Red Devils were defeated by the Dresden Lions April 12. With this loss, the Red Devils now have four district wins and three district losses, while being nine and five for the season.

Cade Malray and Bryce McFarland each batted .500 for the night. Malray only had two at-bats and one hit. McFarland had four at-bats with two hits and one RBI.

Brock Brown spent the first five innings on the mound for the Red Devils. Brown allowed five runs while he was on the mound, all of which was earned. Brown added up two strikeouts in his five-innings pitched.

McFarland came in to relieve Brown in the sixth inning. McFarland allowed three hits and two runs while getting one strikeout.